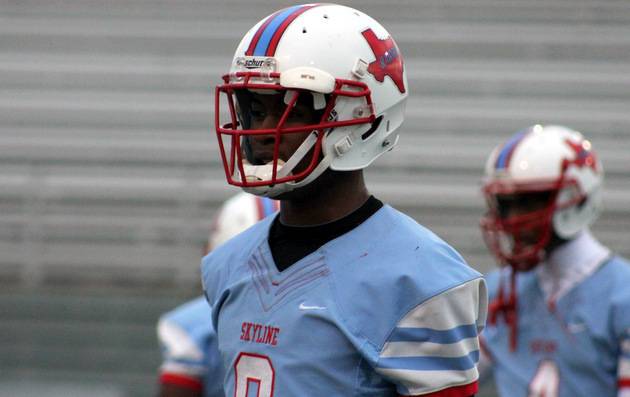 Two years ago, Carlos Strickland was one of the most highly-recruited high school players in the state of Texas. The 6-foot-4, 215-pound wide receiver out of Dallas Skyline rated as a four-star prospect and the No. 20 wide receiver in the 2015 recruiting class. He decided to go to California, but has yet to see a college football field.

What happened? According to various reports, injuries and a desire to return closer to home led to his transfer to Kansas State last summer. He redshirted in 2015 and sat out last season due to transfer rules. Now, he’s finally healthy and ready to roll. He caught four passes for 62 yards in the Wildcats’ spring game.

The way Strickland tells it, he hasn’t played pain-free since he was a sophomore in high school. He told local reporters in April that he played through a sports hernia for almost four years before finally getting it repaired last November. If that’s true, and a now-healthy Strickland can tap into the potential he showed in high school, he could be one of the Big 12’s breakout stars of 2017.

At the very least, he’ll be a big body for teams to deal with on the edge. The good news for Texas is that Kansas State plays four games before coming to Austin. By then there will be some film of Strickland in action.

Strickland: “I would say jump balls (are my strength). Just letting the quarterback throw it up and attack the football at its highest point. Most corners we go up against are 5-10. I’m 6-4. That’s a mismatch.”

K-State coach Bill Snyder: “He is trying to work his way into the mix. He has not quite gotten there yet. He is still in the process of learning the system. I think there are some things he brings to the table. He has some capabilities. We also like his size. It comes down to how quickly he learns, and how he can practice and play with an ease of mind. We do not want him to think all the time, ‘Am I taking the right step here?’ He is kind of at that point right now.

“When we get beyond that, his skill will be forever present.”

The Next 25: No. 10 Kam Brown is a Dallas Cowboys legacy — and one heck of a receiver