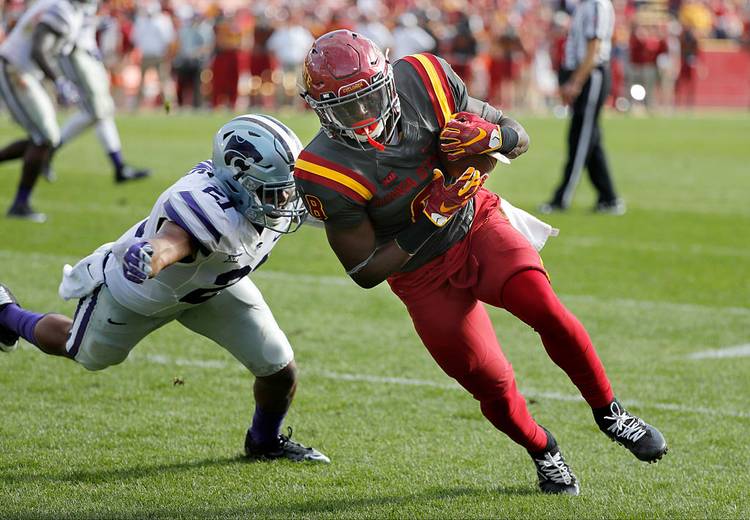 AMES, IA â OCTOBER 29: Wide receiver Deshaunte Jones #8 of the Iowa State Cyclones drives the ball in for a touchdown past defensive back Kendall Adams #21 of the Kansas State Wildcats in the second half of play at Jack Trice Stadium on October 29, 2016 in Ames, Iowa. The Kansas State Wildcats won 31-26 over the Iowa State Cyclones. (Photo by David Purdy/Getty Images)

Deshaunte Jones won’t mind that Iowa State star wide receiver Allen Lazard chose to stay for his senior season. Jones, a sophomore, was the Cyclones’ second-leading receiver last season playing from the slot. With teams concentrating on Lazard, he should have plenty of seams to exploit again this season. The former high school quarterback from Cincinnati caught 37 passes for 536 yards and 6 touchdowns as a freshman.

Catch him if you can. Once Jones gets the ball in his hands, he’s extremely difficult to bring down. Part of that is due to his size. At 5-foot-10, 175 pounds, there’s not a whole lot to grab onto. But there’s more to it than being small. Jones is extremely shifty, and his vision in tight spaces is better than most receivers. Those are skills he developed running the triple option for Colerain High School.

Jones led Iowa State with five 40-yard receptions and two multi-touchdown games, impressive considering who he’s sharing the field with. Lazard is one of the best receivers in all of college football. This season, teams can’t afford to ignore his young protege.

Jones had a career day against the Longhorns last fall, one of few bright spots for the Cyclones in a 27-6 blowout loss. He hauled in five catches for 87 yards.