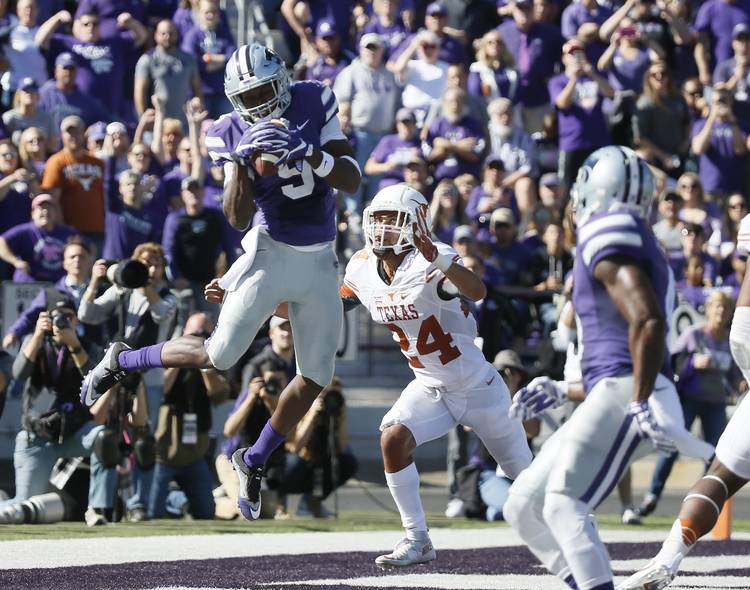 Kansas State Wildcats9 Byron Pringle pulls the ball in for a Touchdown during the second quarter against Texas Longhorns against 24 John Bonney of a NCAA college football game, Saturday, October 22, 2016 at Bill Snyder Family Stadium, Manhattan, Kansas. RICARDO B. BRAZZIELL/AMERICAN-STATESMAN

The most remarkable part about Byron Pringle’s college football career is that it almost didn’t happen. Kansas State coach Bill Snyder took a chance on the Tampa native with a criminal past. So far, it’s worked out. Pringle caught 39 passes for 631 yards and four touchdowns in 2016. He also earned first-team All-Big 12 honors as a returner, with a 28.7-yard average and a 99-yard touchdown against Texas Tech.

The 23-year-old took a circuitous route to Manhattan. At 16, he was arrested and charged with multiple felonies for a series of crimes in Tampa, according to court documents obtained by the Kansas City Star. Charges including burglary, aggravated assault with a deadly weapon and grand theft led to probation, 100 hours of community service and the loss of his junior football season.

He initially signed with Youngstown State, but another robbery charge when he was 19 (later dropped) led him to Butler (Kansas) Community College, where Kansas State discovered him.

Just a quick reminder for you that Byron Pringle is pretty fast and stuff (via @KWCHArielle) #kwch12 pic.twitter.com/Fy3oEx13ID

Speed kills. One wrong step while guarding or tracking Pringle can result in a touchdown. This is especially true on kickoff returns. No offense to Kansas State, but if a returner like Pringle played for a blue-blood program you’d already know his name. If all else fails, you can always punch him in the gut … no, wait, it looks like his K-State teammates already did that.

Way too funny …. Byron Pringle scores on a 99 yard return and get punched #espn #KStateFB pic.twitter.com/8Hgynpgoqo

Pringle caught four passes for 42 yards and a touchdown against the Longhorns back in October, and he returned a kickoff for 31 yards.