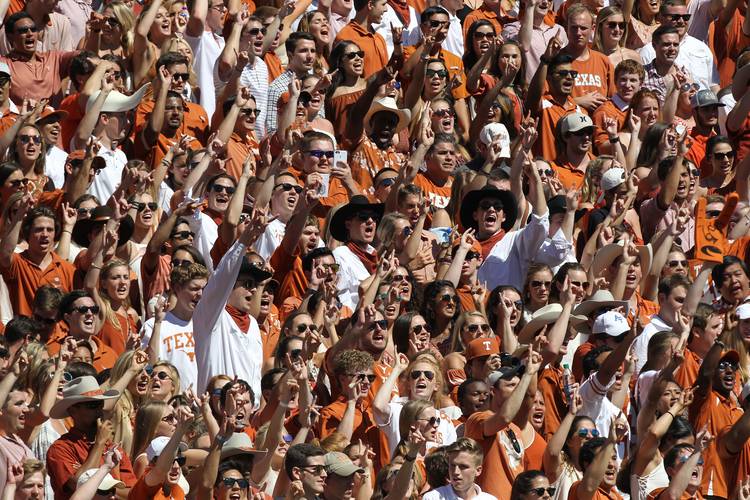 UT fans cheer their team against OU in the third quarter at the Cotton Bowl in Dallas, Saturday, Oct. 8, 2016. (Stephen Spillman / for American-Statesman)

With World War II in full swing, it would be easy to think that the same talent drain and struggles Texas had during World War I would happen again. The first world war saw some of Texas football’s most mediocre seasons in large part to the lack of males (not to mention male athletes) on campus.

World War II was different for Texas football. The Longhorns had some of the best seasons in program history (at that time) during the war. First came 1942, when Texas won the Southwestern Conference and went to its first bowl game.

The following year built on that season. Texas won its second-straight SWC title, this time going 5-0. It was the first time back-to-back conference title in program history. Texas lost to Southwestern 14-7 for its only SWC loss, then won seven straight games.

Texas beat Texas A&M 27-13. It was the fourth straight win over the Aggies, the longest winning streak over Texas A&M at the time.

Texas was ranked as high as No. 12 in the country after debuting in the rankings at No. 16 (back in the day, the AP didn’t release a poll until mid-October, which is how it should be, right?).

Texas played in its second Cotton Bowl on January 1, 1944 and tied Randolph Field.

What is Randolph Field? Randolph Field was a college at what is now Randolph Air Force Base in San Antonio. The Ramblers would go 12-0 in 1944 and finish third in the polls.

According to Bible, the weather was some of the worst he ever experienced as a coach as cold and rain hit the field. Randolph took an early lead, but George McCall hauled in a pass from Ralph Ellsworth to tie the game.

Texas wouldn’t return to the Cotton Bowl until 1946.