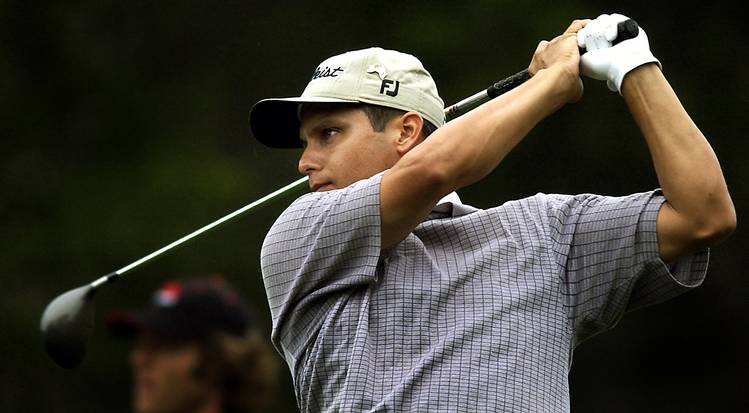 2/13/03 Ralph Barrera AMERICAN-STATESMAN; Austinite Omar Uresti blasts his tee shot on the Par 4 1st hole, his 10th of the day, at the Cliffside course of the Barton Creek Resort and Club in Austin, TX. Thursday morning Feb. 13, 2003 during the first round of the TravelTex.com Canadian Tour tournament. Uresti shot a morning round of one under par 69 to sit in second place, three shots out of the early lead. (Smith story)

SUNRIVER, Ore. — Former PGA Tour player Omar Uresti won the 50th PGA Professional Championship in a playoff with Dave McNabb on Wednesday to top the 20 qualifiers for the PGA Championship.

Along with the spot in the PGA Championship in August at Quail Hollow in Charlotte, North Carolina, Uresti earned $50,000 and received berths in six PGA Tour events in the next 12 months.

Uresti and McNabb parred the par-4 18th on the first playoff hole, with McNabb making a 10-foot comebacker to stay alive after Uresti tapped in for par.

Uresti and McNabb each shot 3-under 69 to finish at 4-under 283. The 51-year-old McNabb is the PGA head professional at Applebrook in Malvern, Pennsylvania,

Paul Claxton (71) and University of Illinois coach Mike Small (73) tied for third at 2 under. Small was trying to win the event for a record fourth time.

Third-round leader Rod Perry closed with a 79 to finish eighth at even par. He won in 2013 when the tournament was last played at Crosswater.

The final two spots in the PGA Championship were decided in an eight-man playoff.