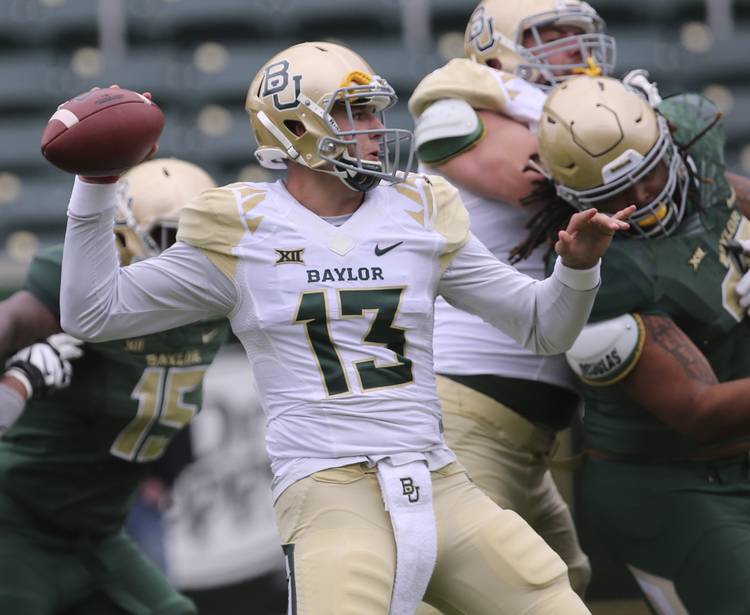 Sophomore Zach Smith is a former top 300 recruiting hailing from Grandview High School. The high school All-American enrolled in January 2016 at Baylor, and he was supposed to play behind Seth Russell and Jarrett Stidham. But Stidham transferred following the firing of Art Briles, and Russell was plagued by injuries. Baylor, like Texas, turned to the true  freshman. Smith threw for 1,526 yards with 13 touchdowns and seven interceptions. He started for Baylor against Boise Stat in the Cactus Bowl and made plays like this:

Well, first off, do they need to watch for Smith at all? Texas spent a lot of time this spring trying to lure a graduate transfer to the program to compete with Shane Buechele for the starting job. Texas also had a prolific high school passer, Sam Ehlinger, coming into the program for spring ball. Texas didn’t land its graduate quarterback, but Baylor did. The Bears quarterback set up is very similar to how Texas seemingly wanted it for this fall. Smith is a returning starting quarterback who put up decent numbers as a true freshman, but high school recruit Charlie Brewer entered the program this spring as well as former Arizona quarterback Anu Solomon, a graduate transfer. Smith has his work cut out for him if he wants to win the starting job for first-year coach Matt Rhule.

Seth Russell was healthy when Baylor played Texas, and thus Zach Smith didn’t play against the Longhorns. Russell threw for 226 yards and two touchdowns while being sacked six times… which may help explain the injury issues he had last season.

Jarrett Allen just the beginning as Texas, Smart on track to produce another lottery pick in 2017