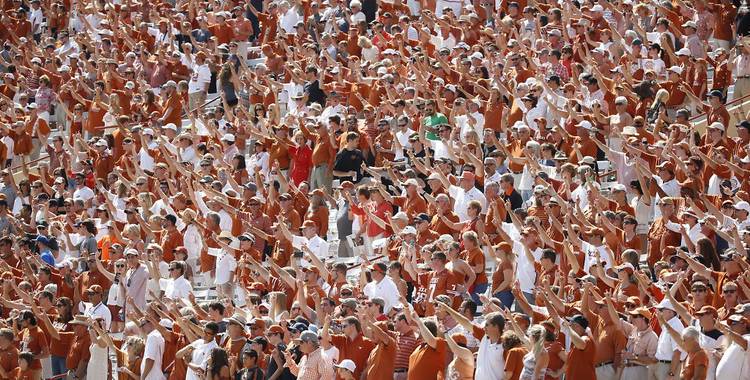 Texas fans cheer on the Longhorns during the first half against Oklahoma State at Darrell K. Royal Memorial Stadium in Austin. JAY JANNER/AMERICAN-STAESMAN

Very few Texas head coaches have also been an undergraduate at the University of Texas. Clyde Littlefield is the most successful alum-turned head coach. David McWilliams is the most recent.

And somewhere in the middle is Ed Price.

While a student, Price played on championship teams  in football, basketball and baseball between 1930 and 1933. He also wrote for the Daily Texan while a student.

He left Austin to become a high school and junior college coach at Hillsboro and El Paso.

When Cherry stunned the college football world with his retirement following the 1950 season, athletic Dana X. Bible quickly turned to Price. By that time, Price was had long been what would be considered the defensive coordinator in today’s game and the fan base and players were appeased by the hiring  of Price.

His first season at Texas, Price went 7-3. But two of those loses were significant. Texas A&M hadn’t beaten Texas since 1939, but topped the Longhorns 22-21 on Thanksgiving Day. Earlier in that season, Texas lost to Arkansas, a team they hadn’t lost to since 1938. He did, however, snap a three-game losing streak to Oklahoma, beating the Sooners 9-7.

Texas was preseason No. 11, and when the first in-season polls debut in October, Texas jumped to No. 6. The Longhorns never fell out of the top 25 during the season, but finished unranked in the final AP poll. Texas finished third in the conference, and missed its second bowl game in three years.