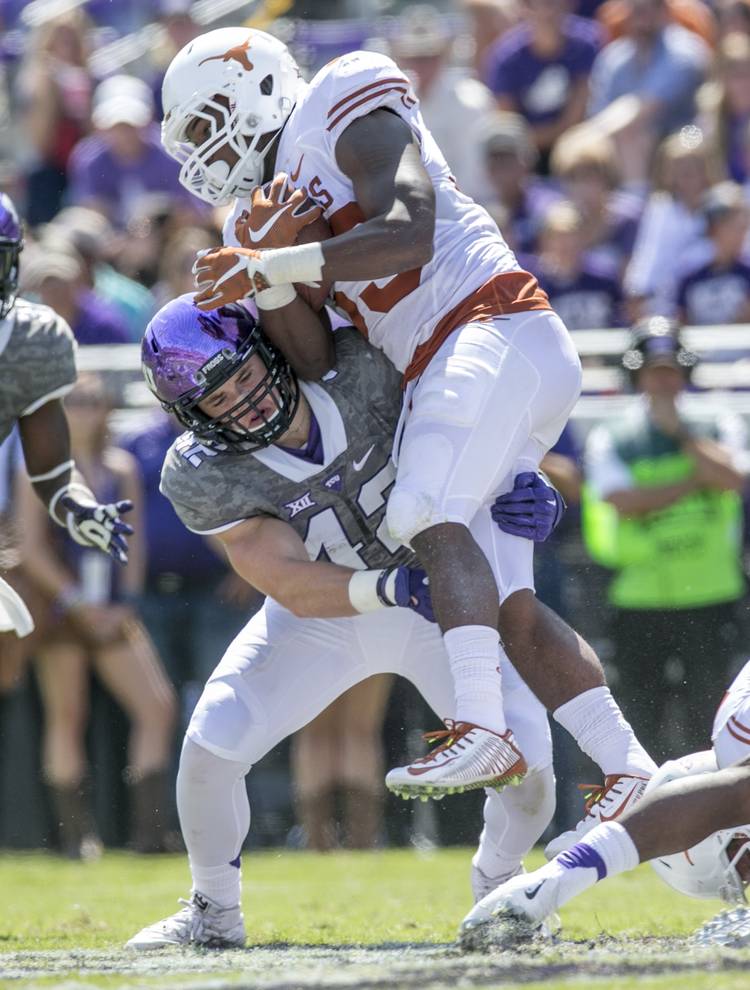 Texas running back D'Onta Foreman (33) is tackled by TCU linebacker Ty Summers (42) in the third quarter during the Texas at TCU game Saturday, Oct. 3, 2015, in Fort Worth, Texas. (Rodolfo Gonzalez/Austin American-Statesman)

Watching film of Ty Summers blowing up opposing running backs, it’s hard to fathom that he played quarterback in high school. Yet the same player who took D’Onta Foreman to “Suplex City” two years ago (watch below) accounted for more than 3,700 yards in leading San Antonio Reagan to a district championship in 2013. Now he’s half of the best linebacker duo in the Big 12. Summers made 121 tackles in 2016, second-most in the conference, and landed second-team All-Big 12 honors.

In addition to his normal duties, Summers might be adding a new wrinkle to his game in 2017. Horned Frogs coach Gary Patterson had him working at defensive end this spring, according to the Fort Worth Star-Telegram. The reasoning? “You’ve got to create sacks,” Patterson said. “In this league, you’ve got to be able to rush with four. So you’ve got to find ways to do that.” Summers only had 1.5 sacks in 2015, so it will be interesting to see how much if any he rotates at defensive end.

Summers made 14 stops (11 solo) and had a sack against the Longhorns in 2016. He also defended a pass. In 2015, he had four tackles including the body slam on Foreman.