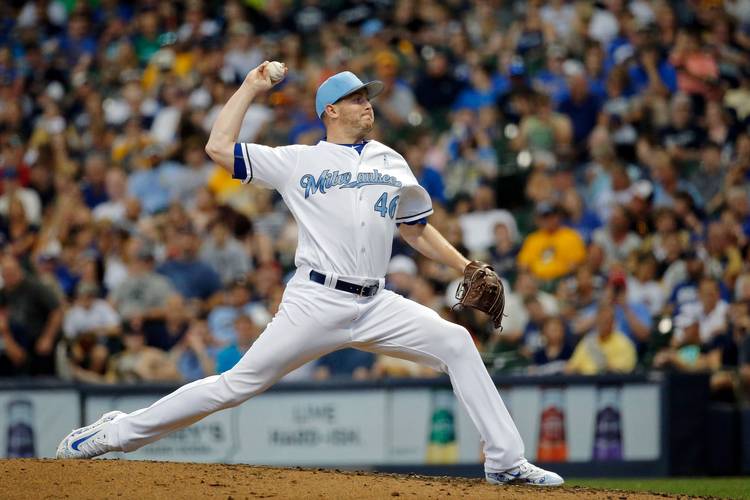 Corey Knebel #46 of the Milwaukee Brewers pitches against the San Diego Padres during the ninth inning at Miller Park on June 17, 2017 in Milwaukee, Wisconsin. (Photo by Jon Durr/Getty Images)

Once identified as a Longhorn, Eagle and Bear, Corey Knebel is now an all-star for the first time. He’ll also soon be a father.

Knebel was selected on Sunday to play for the National League in next week’s MLB All-Star Game. A closer for Milwaukee, Knebel is 0-1 with a 1.13 ERA and 13 saves this season.

Knebel, who is in his fourth major-league season, set a season-starting record last month for consecutive relief appearances with at least one strikeout. The MLB-best streak currently stands at 40 games.

Knebel pitched in high school at both Georgetown and Bastrop. He then spent three seasons years at Texas, and Knebel’s 37 career saves rank behind only Huston Street in the UT record books. Knebel gives Texas an all-star representative for a second straight season as Brandon Belt was a reserve infielder in 2016.

The MLB All-Star Game will be played on July 11 in Miami.

The all-star selection wrapped up a newsworthy day for Knebel, who did not pitch in the Brewers’ 10-3 loss to Miami. Before the game, Knebel found out that he and his wife, Danielle, would be having a girl. The Knebel’s first child is due in November.