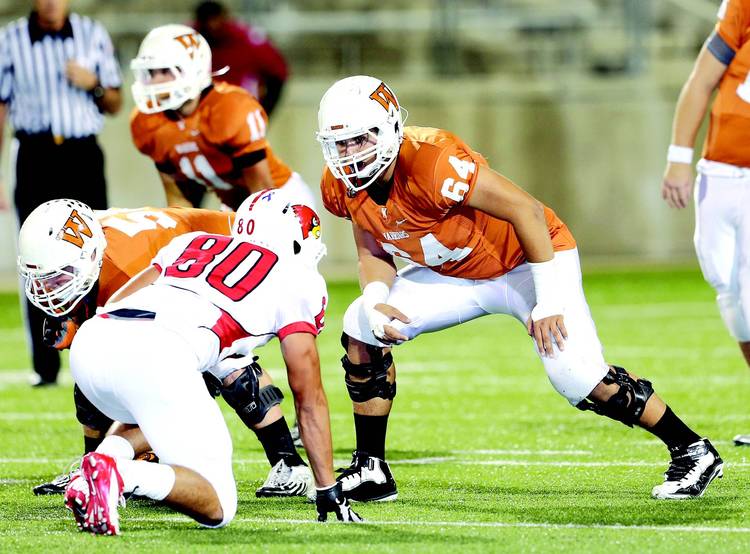 Westwood's Brendan Moore lines up across from Del Valle's Brian Buckberry during the bi-district round in 2012. Jamie Harms/ FOR ROUND ROCK LEADER

Brendan Moore will feel right at home when Maryland comes to Royal-Memorial Stadium. The Terrapins center is from Austin and starred at Westwood High School. Upon singing with Maryland in 2014, Moore penned an essay on his recruitment that was published on the Austin American Statesman‘s Varsity News blog.

Moore’s standing on this list isn’t all about local ties, though. Entering his second season as a full-time starter, the junior was named to the Rimington Trophy watch list. He also received the top spot on ESPN NFL Draft expert Mel Kiper Jr.’s list of underclassmen center prospects.

Moore helped Maryland rush for more than 2,500 yards in 2016, but he’s struggled at times in pass protection. The Terps were 127th out of 128 FBS teams last year in sacks allowed, giving up 49 over the course of the season. That contributed to the team’s inability to find a consistent quarterback, as starter Perry Hills was plagued by a shoulder injury. Right behind establishing a starting quarterback, protecting him will be the key to Maryland’s season offensively.

CORRECTION: A previous version of this article stated that Moore grew up in Round Rock. Moore is from Austin and attended Westwood, which is part of the Round Rock Independent School District.