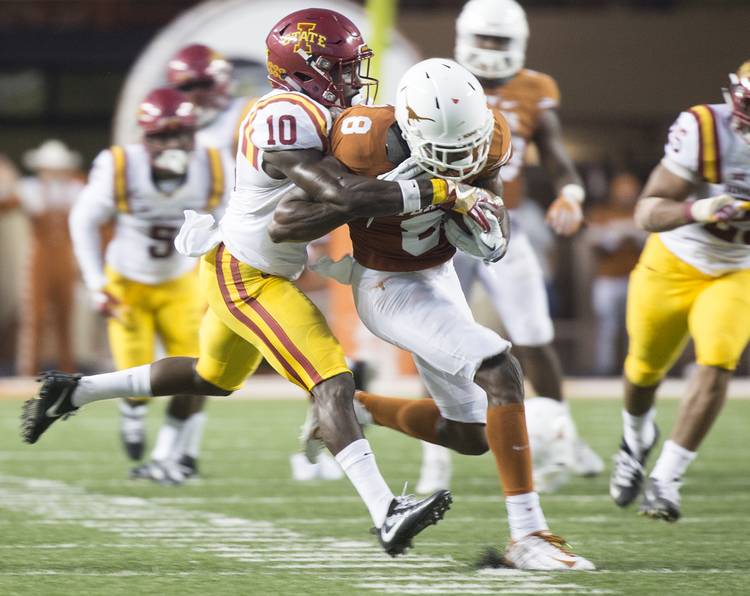 At least one member of Texas’ new coaching staff is very familiar with Iowa State cornerback Brian Peavy. The Houston native played for Longhorns tight end coach Corby Meekins at Westfield High School, where he had nine interceptions as a senior. He’s been a vital piece of the Cyclones’ defense his first two seasons, picking up All-Big 12 honorable mention status in 2015 and 2016. Last year he led Iowa State with 11 passes defended, which could be a sign of big things to come.

As mentioned above, Peavy was around the ball a lot in 2016. In addition to his 11 pass breakups, he also made 82 total tackles (3.5 tackles for loss), an interception and a forced fumble. Now a redshirt junior, he’ll be leaned on even more as a leader and playmaker. Part of that will be trying to turn a few more of those breakups into turnovers.

Perhaps the most replayed clip from last year’s meeting between Iowa State and Texas features Peavy trying in vain to catch Devin Duvernay on his 75-yard touchdown grab. He finished with 6.0 tackles and a pair of pass breakups, and that Duvernay play wasn’t all his fault. In 2015, Peavy made five stops and defended two passes against Texas.

CBS ‘hot seat rankings’: Texas fans don’t have to worry about their coach