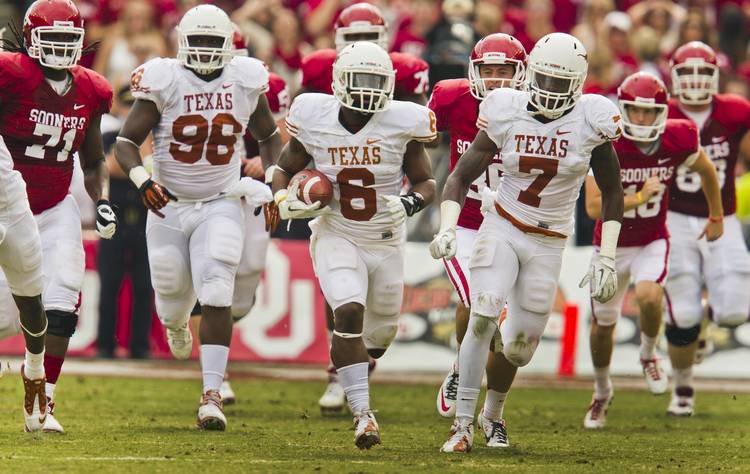 Ricardo B. Brazziell/American-Statesman 10/13/12 Texas Longhorns' (6) Quandre Diggs returns a blocked field goal for an score against Oklahoma in the first quarter of the NCAA college football game at Cotton Bowl Stadium in Dallas,TX., Saturday, Oct. 13, 2012.

In less than two weeks, Tom Herman will meet the Big 12 media.

On Thursday, the Big 12 revealed which coaches and players will be speaking at the conference’s annual media days. The event will be held at The Star in Frisco from July 17-18.

Texas is among five schools that won’t bring a quarterback. The Longhorns chosen to accompany Herman shouldn’t be much of a surprise, though.

Locke’s leadership abilities were championed by Herman throughout the spring and Hughes is among the most-tenured players on the roster. Locke and Hughes were also the first two players that Texas had speak during spring practices. Williams earned All-American honors in 2016, and Dickson was a finalist for the Ray Guy Award.

The American-Statesman’s Top 25 countdown: No. 24 Oregon