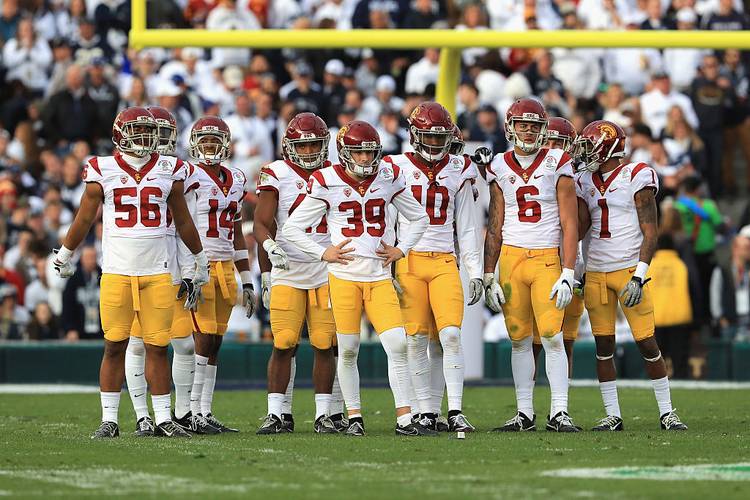 USC Trojans players look on against the Penn State Nittany Lions during the 2017 Rose Bowl Game presented by Northwestern Mutual at the Rose Bowl on January 2, 2017 in Pasadena, California. (Photo by Sean M. Haffey/Getty Images)

Someone is going to benefit from USC quarterback Sam Darnold’s arm. Why not the son of NFL running back Michael Pittman? The Trojans are loaded on defense and almost everywhere else, but wide receiver still remains a bit of a question mark. JuJu Smith-Schuster and Darreus Rogers have both moved on, which leaves Deontay Burnett as the likely No. 1 — and a good one at that. Tight end Daniel Imatorbhebhe should also get plenty of touches.

And here’s where the eyes start to roll, but despite only catching six passes last year Michael Pittman Jr. showed that he’s not just riding his father’s coattails. The 6-foot-4 former four-star recruit did the dirty work befitting a true freshman bound for productivity. Playing mostly on special teams, Pittman blocked a punt and forced a fumble, made seven tackles and had several key downfield blocks on long runs.

For a glorified reserve, this nearly five-minute highlight package pieced together by a fan on YouTube is oddly compelling.

A smaller target, Burnett operated mostly in the slot in 2016. Someone must replace the aforementioned Smith-Schuster and Rogers outside, and Pittman spent the spring positioning himself to do just that. Might there be growing pains? Sure. But given Pittman’s proven work ethic and ample time working with one of the best quarterbacks in the country, it’s just as likely he explodes on the scene in time for the Trojans’ showdown with Texas on Sept. 16.