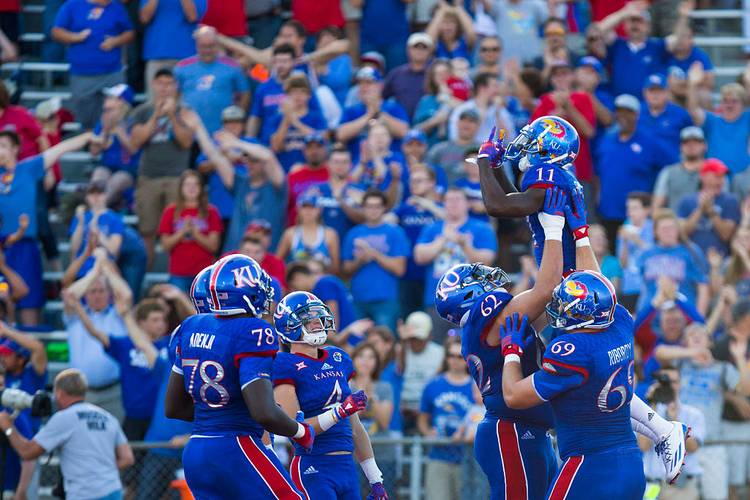 LAWRENCE, KS - SEPTEMBER 03: Steven Sims Jr. #11 of the Kansas Jayhawks celebrates with his team after scoring a touchdown against the Rhode Island Rams defense in the first half on September 3, 2016 at Memorial Stadium in Lawrence, Kansas. (Photo by Kyle Rivas/Getty Images) Steven Sims Jr.

Hakeem Adeniji will represent Kansas next week at Big 12 media days, barely a year after he arrived in Lawrence under extraordinary circumstances. Adeniji signed to play for Air Force, but was ineligible to attend the academy because of a cashew allergy. The news didn’t arrive in June, and Adeniji found a spot on the Jayhawks roster because his high school coach had recently accepted a job as KU’s director of personnel. (Seriously, you can’t make this stuff up.) Despite arriving late and undersized at 265 pounds, Adeniji started all 12 games — switching from right tackle to left tackle midway through the season — and achieved All-Big 12 honorable mention status.

Adeniji is now listed at 290 pounds, so if pushing him around was an option before it’s becoming increasingly more difficult. The offensive line as a whole struggled at times in 2016, but the Garland native’s experience and added weight should help shore things up in 2017.

Of Adeniji’s 22 knock-down blocks last fall, six of them came against the Longhorns.

D’Onta Foreman has a day, literally, in Texas City