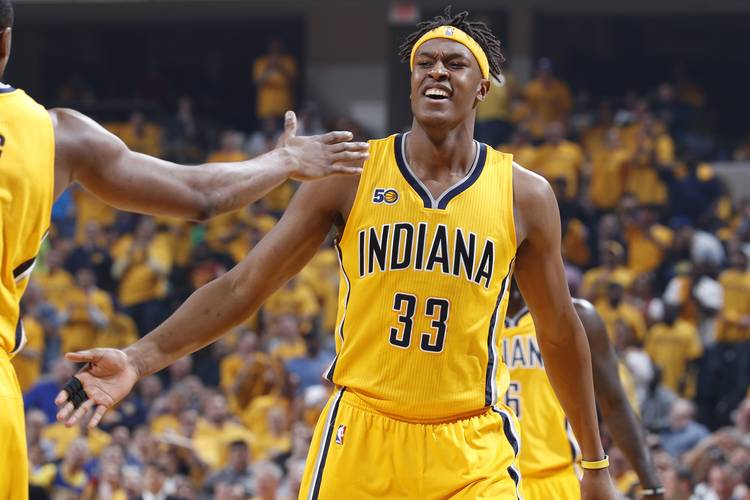 INDIANAPOLIS, IN - APRIL 20: Myles Turner #33 of the Indiana Pacers reacts in the second quarter of Game Three of the Eastern Conference Quarterfinals during the 2017 NBA Playoffs against the Cleveland Cavaliers at Bankers Life Fieldhouse on April 20, 2017 in Indianapolis, Indiana. (Photo by Joe Robbins/Getty Images)

Former Longhorn standout turned face of the Indiana Pacers Myles Turner told Dallas radio hosts of 105.3 The Fan’s Ben & Skin that he wanted to stay in Austin for at least another season, but his parents pushed him to enter the NBA Draft in 2015.

In the end, Turner said his parents recommended he enter the draft saying he was a hot commodity.

Turner was drafted 11th overall by the Pacers and in two seasons shown promise as a 6-foot-11-inch multi-talented big man. The Pacers are using him as a building block after trading all-star Paul George last month.

This is instantly a major “what-if” for Texas. The Longhorns were ready to move on from coach Rick Barnes following Turner’s freshman season, in which he was named Big 12 Freshman of the Year. The year was a mild disappointment as Texas had the bulk of its roster returning from an exciting 2014 squad.

The Longhorns lost in the first round of the NCAA Tournament to Butler, 56-48, and about 10 days later Barnes was officially out at Texas.

What if Turner, a lock to be drafted and possible lottery pick, had decided to stay? Would Texas have stuck with Barnes for at least another season?

Or what if Turner returns and Texas still hires Shaka Smart, and thus he joins a scrappy NCAA Tournament of 2016?