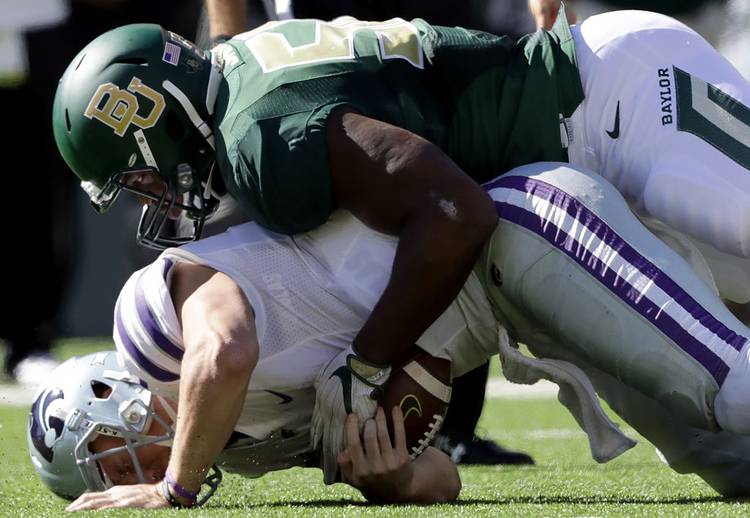 WACO, TX - NOVEMBER 19: Jesse Ertz #16 of the Kansas State Wildcats is sacked by K.J. Smith #56 of the Baylor Bears at McLane Stadium on November 19, 2016 in Waco, Texas. (Photo by Ronald Martinez/Getty Images)

So much about Baylor football is in flux, but K.J. Smith continues to be a steady presence. The Bears’ lone first-team All-Big 12 selection in 2016 enters his senior season as the leader of a deep defensive line. The Frisco native led Baylor and was among conference leaders in tackles for loss (11.0) and sacks (7.0).

Primarily a pass-rushing end, Smith has been known to slide inside at times. That won’t be the case this season, at least according to what new Bears coach Matt Rhule told media this spring. Rhule said he wants to give Smith the best opportunity to play in the NFL, and that means getting as many reps as possible outside.

The Longhorns limited Smith to only four tackles (none for loss) last year in Austin. He didn’t record a stop in 2015, and had three tackles including one for loss as a freshman playing at Royal-Memorial Stadium.

Another day, another Longhorn lands on an award watch list

Myles Turner: ‘I wanted to stay. Austin, TX is like my favorite city in the U.S.’