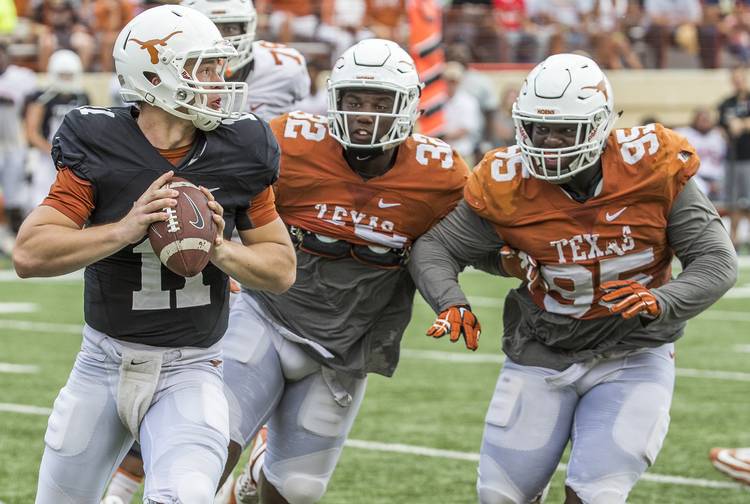 Texas Longhorns (11) Sam Ehlingerlooks to pass as (32) Malcolm Roach and (95) Poona Ford tried to get a sack during the Orange and white spring football game at the Darrell K Royalâ€“Texas Memorial Stadium on Saturday, April 15, 2017 RICARDO B. BRAZZIELL/AMERICAN-STATESMAN

With the countdown to Texas’ football season at 52 days, the Big 12 is forecasting big things for a quintet of Longhorns.

Williams is coming off an All-American season at left tackle, while Dickson was a Ray Guy Award finalist in 2016. Last year, Ford and Roach, respectively, ranked fourth and 12th among the Longhorns with their 54 and 33 tackles. Jefferson tallied 62 tackles and 5.5 sacks this past season.

Jefferson and Williams, who are both juniors, are repeat picks on the Big 12’s preseason honor roll. Last July, the media selected Jefferson as the defensive player of the year.

Oklahoma senior quarterback Baker Mayfield, who graduated from Austin’s Lake Travis High, was the Big 12’s offensive player of the year for a second straight preseason. Forecasters predicted that Kansas lineman Dorance Armstrong, Jr., will be the conference’s best defender. West Virginia quarterback Will Grier was tabbed as the top newcomer following his transfer from Florida.

The Big 12 is set to host its annual media convention next week, and Williams and Dickson are among the Longhorns who will be in Frisco. Texas opens its football season with a home game against Maryland on Sept. 2.