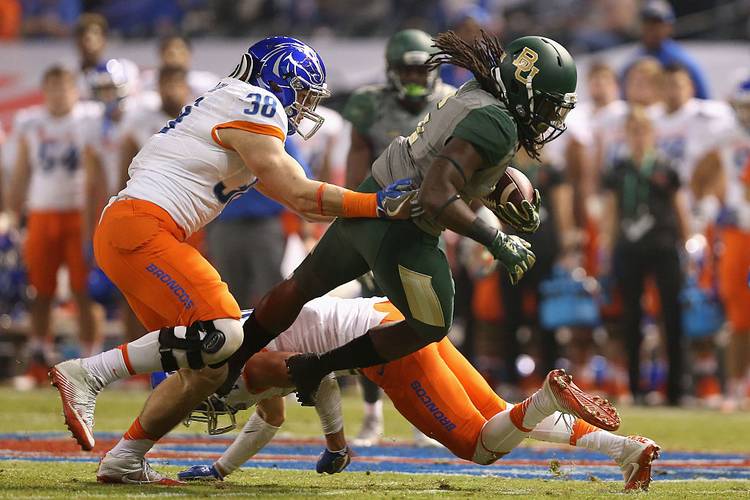 Running back JaMycal Hasty #6 of the Baylor Bears runs with the football after a reception past linebacker Leighton Vander Esch #38 of the Boise State Broncos during the second quarter of the Motel 6 Cactus Bowl at Chase Field on December 27, 2016 in Phoenix, Arizona. (Photo by Christian Petersen/Getty Images)

You could argue that Baylor has the best running back tandem in the Big 12. Terence Williams returns as a 1,000-yard rusher, while JaMycal Hasty is a backup that could start for many Power 5 teams. The sophomore broke out in 2016, finishing his redshirt freshman campaign with 623 yards on 119 carries.  At 5-foot-8, 200 pounds, he’s a bruising back that provides balance to Williams’ speed.

As mentioned above, Hasty is small and stocky, which makes him perfect for short-yardage and goal line situations. He only scored three touchdowns as a freshman, but with more touches and added responsibility in year two that number should rise. While he’s not as much of a big-play threat as Williams, Hasty can also make defenders miss. If he stays healthy, don’t be surprised if Hasty threatens 1,000 yards.

Hasty rushed for only 13 yards on six carries against Texas, his second-lowest output of the season.