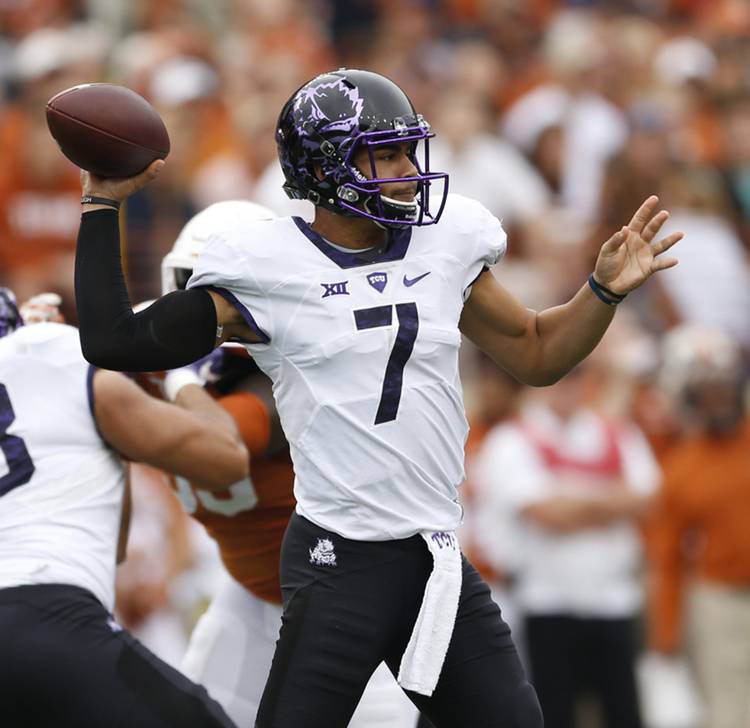 TCU QB #7 Kenny Hill during the first quarter of their game against Texas at Royal-Memorial Stadium on Friday November 25, 2016. JAY JANNER / AMERICAN-STATESMAN

TCU’s starting quarterback needs no introduction. Kenny Hill was supposed to light the Big 12 on fire after transferring from Texas A&M, but his first season was more of a mixed bag. He got a large portion of the blame for the Horned Frogs’ disappointing 6-7 record, and some of it was deserved. His 13 interceptions were a league high, a result of his penchant for taking risks. But he also completed 61 percent of his passes and was a constant threat with his legs.

The key will be retaining his play-maker’s mentality while eliminating some of the mistakes that come with it, something he’s been working on with quarterback guru George Whitfield Jr. Less drops from his receivers would also be nice.

Talent has never been an issue with Hill. Watching his highlights, you can see why evaluators have drooled over his skills since high school. His running ability combined with a strong arm make him an ideal zone-read quarterback, and he generally makes good decisions in the pocket. He’s just a little too confident at times, and can get caught trying to throw a ball into a tight window or across his body on the run. Putting him under pressure is key, but it’s a tight line to walk. Sometimes Hill’s risks pay off.

Just how TCU drew it up on this 46-yard TD pass from Kenny Hill to Desmon White…uh we mean Taj Williams! #SCTop10 pic.twitter.com/6SVsXKkkj6

In last year’s 31-9 win over Texas, Hill completed 15 of 29 passes for 150 yards and an interception. He did more damage with his legs, taking off 13 times for 78 yards and two touchdowns — including a 41-yard burst in the second half.

Then again, he also did this…

The American-Statesman’s Top 25 countdown: No. 14 Georgia