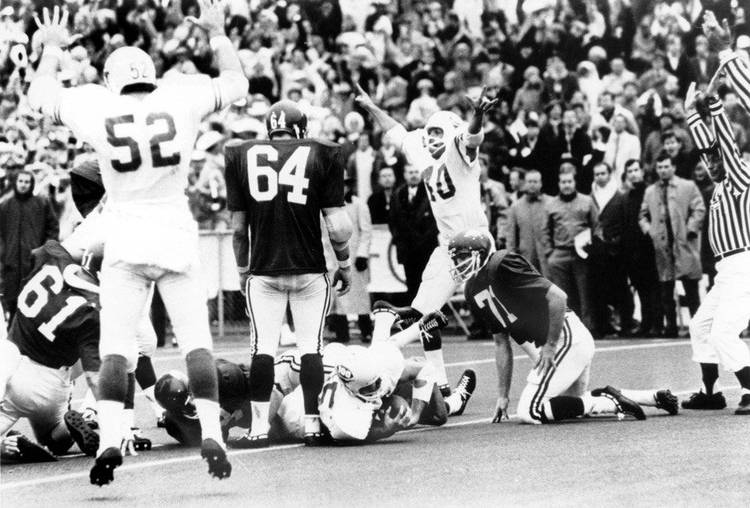 Texas Longhorns, Forrest Weigand (52), and Randy Peschel signal Jim Bertelsen's two yard touch down score that led to the 15-14 win over Arkansas and the National Champioship in 1969. President Nixon attended the game and presented Coach darrell Royal and the Longhorns with the champioship award. (Houston Chronicle file photo)

In the debate of greatest Longhorn seasons ever, there are truly only three seasons that can be debated: 1963, 1969 and 2005.

For those who are fans of the 1963 season, the first title, it’s easy to select that squad. They went 11-0 and beat the No. 1 and No.2 ranked teams during the season.

But that squad also played in four games decided by four or fewer points.

The 2005 team is the most recent title team (I promise we’ll get there, but first you need to suffer through the Mackovic and McWilliams eras like everyone else), and there’s lots to love. Vince Young’s Rose Bowl performance, a 12-0 team that somehow was a heavy underdog in the title game and how Texas avoided the “let down game” all year long. That 2005 team is definitely the greatest “monkey off the back” season for Texas and only two games were close, the title game and the biggest road win in program history against No. 4-ranked Ohio State.

But even that squad has some warts (maybe one?), if we’re nit-picking. Texas played just three ranked teams in the regular season–  crushing two of them at home– and maybe the conference (with a weaker Oklahoma team that season) wasn’t the strongest in 2005?

But with all this, many Texas fans will say the greatest season in program history is 1969. It’s certainly the most dramatic.

Texas’ offense was crushing teams and the defense was just as good. Outside of the 15-14 win over No. 2 Arkansas in December (also known as the “Game of the Century,” more to come on this), that actually sealed the national championship for Texas, the Longhorns’ next closest game in the regular season was a 27-17 win over No. 8 Oklahoma.

Texas beat No. 9 Notre Dame in the Cotton Bowl 21-17, sealed by one of the greatest defensive plays in program history, Tom Campbell’s (son of Texas defensive coordinator Mike Campbell) interception in the fourth quarter. Danny Lester also had a pick in that game.

Texas rushed for 3,630 yards and 51 touchdowns and averaged 5.3 yards per carry. The Longhorns averaged 472.1 yards per game. They allowed just 2,260 yards on the season, and the defense allowed an average of 226 yards. Texas picked off 27 passes and allowed just six –SIX– rushing touchdowns.

Also, as talented and loaded as the 2005 team, the 1969 team may have had just as much or more talent on offense (proportionately to eras). James Street was at quarterback, while Texas rolled out a rushing attack that featured Jim Bertelsen (a Wisconsin native), Steve Worster, Ted Koy, Bobby Callison and Billy Dale. Backup quarterback Eddie Phillips, who took over for Street in 1970, was also talented.  Cotton Speryer and Randy Peschel were catching passes. All this and the best player might have been an offensive lineman

Offensive tackle Bob McKay was a first round pick and consensus All-American. Koy and Leo Brooks were also drafted that spring.

Even Texas’ 1969 team had one of the best kickers in program history, Fredricksburg native Happy Feller.

Other things that happened in 1969:

The Arkansas game pitted No. 1 Texas and No. 2 Arkansas in Fayetteville and it’s one of the greatest games ever played. Texas trailed 14-0 after three quarters and won 15-14.

The game featured everything, so much so it’s wonder why there’s not a movie about it.

Originally scheduled for October, ABC executives convinced Arkansas to move the game to December for the final contest of the season. Billy Graham gave a pregame prayer, president Richard Nixon attended so he could give a plaque to the winner (because the winner would be the AP national champion in the poll) and another future president, George H.W. Bush was also there.

Penn State, which was also undefeated, hated that Nixon was going award the winner the championship because they technically still had a shot at being voted No. 1. This led Penn State coach Joe Paterno saying in a 1973 Penn State commencement speech: “I’ve wondered how President Nixon could know so little about Watergate in 1973 and so much about college football in 1969.”

Texas won the game in dramatic fashion thanks to a 44-yard, off-the cuff passing play from Street to Randy Peschel that helped set up Jim Bertelsen’s game-tying touchdown. After converting the two-point conversion, Tom Campbell would pick off an Arkansas pass to seal the game.

After this, Arkansas went on to lose to Archie Manning and Ole Miss in the bowl game, while Texas played Notre Dame in the Cotton Bowl.

Of course this game was in a movie, My All-American, the story of Freddie Steinmark. The Colorado native came to Texas and was a standout. Two days after the Arkansas game, x-rays revealed that Steinmark had a tumor above his left knee, and doctors had to amputated the leg. Steinmark died in 1971 still battling cancer.

Other historical 1969 notes: Notre Dame didn’t play in many bowl games. In fact, it was the first bowl game for the Fighting Irish since the 1925 Rose Bowl. Notre Dame, of course, was the top program in college football for the majority of that time, so it was their choice not to go to bowl games.

They should have waited a year, because Texas beat them 21-17 to complete the undefeated season.

The 1969 season is also known as the end of an era. Texas’ 1969 team is the last all-white team to win a national title. Texas football broke its color barrier this season when freshman Julius Whittier arrived on campus, but freshmen were not allowed to play on varsity in those days. The University of Texas began admitting black students in 1956, and in 1963 the athletics department allowed black students to compete for the Longhorns.

Royal wasn’t proud of the slow progress, noting “they weren’t changing that quickly around here at the time” in 2005. Whittier, an offensive lineman from San Antonio, was offered a scholarship and came on board in 1969 and would make his varsity debut the following season. He was a three-time all-Southwest Conference player.  Whittier went on to earn a Master’s degree and law degree. He is in the Longhorn Hall of Honor.