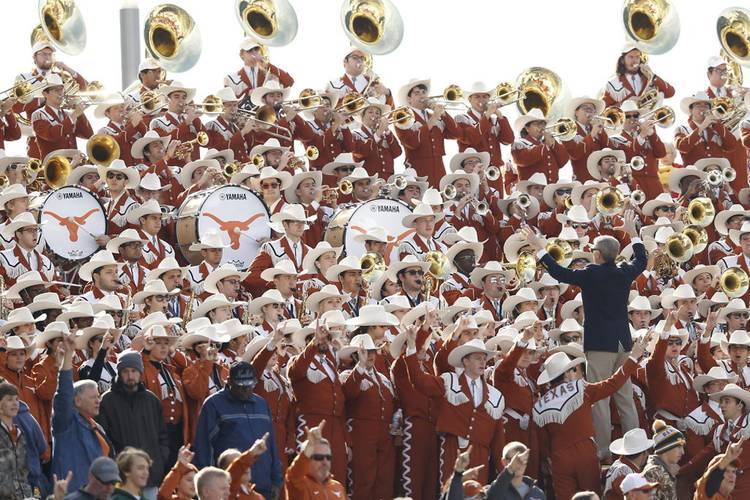 The University of Texas marching band plays during the first half of the Longhorns game against Baylor at McLane Stadium, Dec. 5, 2015. (JAY JANNER / AMERICAN-STATESMAN)

FRISCO — In a bid to crack down on the length of games, the Big 12 will now enforce a strict 20-minute halftime policy, according to the league’s director of officiating.

No more five-minute extensions for halftime at the school’s request, Walt Anderson said. Starting this season, once the field of play is cleared from the first half, a 20-minute clock will start and play will resume once it expires. Period, Anderson said.

That won’t be a problem for the Longhorn band.

The typical show performance is seven minutes if the Longhorns are sharing halftime with the visiting team’s band, said Longhorn band director Scott Hanna. If there is no visiting band, then the Longhorn band typically goes a few minutes longer.

“We don’t anticipate any changes to our performances as a result of this specific rule change,” Hanna said. “The vast majority of Big 12 halftimes in previous years have been 20 minutes, and in my time at the university the requests for an extended halftime have been limited to one per year (and in some years no requests for extension), so this new rule does not represent much a departure for us.

“We really appreciate the league articulating specific policies regarding the band performances at halftime,” Hanna added, “and are looking forward to a great fall with all of our faithful Longhorn fans!”

There are not many other notable rule changes this season. Officials will flag a coach for unsportsmanlike conduct if the coach comes into the field of play to complain. “We’ve allowed coaches to get a little too aggressive,” Anderson said.

Also, horse collar tackles will now be called if the defensive player grabs the nameplate on the jersey.

The American-Statesman’s Top 25 countdown: No. 12 LSU