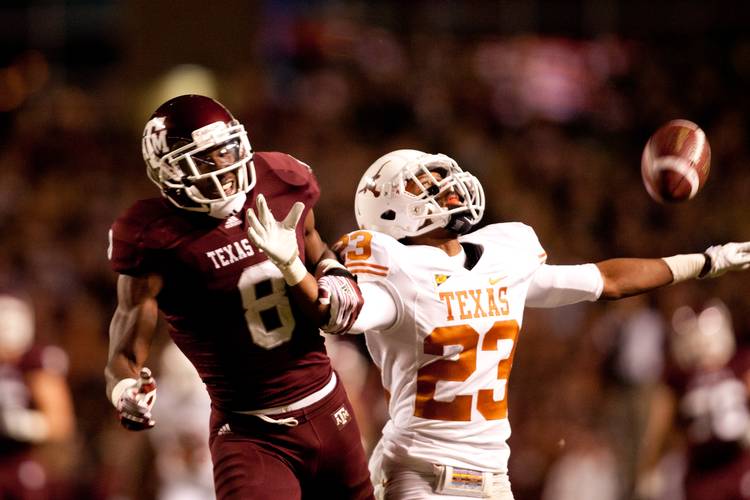 Carrington Byndom #23 of the Texas Longhorns breaks up a pass intended for Jeff Fuller #8 of the Texas A&M Aggies in the first half of a game at Kyle Field on November 24, 2011 in College Station, Texas. (Photo by Darren Carroll/Getty Images)

FRISCO — Let there be no doubt about Tom Herman’s stance on the most controversial issue of our time: The Longhorns should be playing the Aggies.

The Texas coach admitted the political hot potato is “well above my pay grade.” But he wants to start a regular-season series against Texas A&M, a school that ended the century-old rivalry by jetting off for the Southeastern Conference in 2012.

“The fact that Texas A&M left our conference, our fans, we don’t play a rival at home ever,” Herman said. “Now, can we kind of generate and fabricate some new rivalries? Sure. I don’t know why we can’t play A&M as our marquee non-conference opponent.”

Herman rattled off several key intrastate, non-conference rivalries that dot the college football landscape, like Florida-Florida State and Clemson-South Carolina. He noted that the SEC plays eight conference games per year while the Big 12 has nine.

“If you’re going to play a big-boy schedule such as LSU, USC and Ohio State,” Herman said, “I’d like to see us play the big boy right down the road from us.”

And just so there’s no wiggle room, Herman was asked again to confirm that he definitely wants to play Texas A&M. “I don’t believe this is off the record,” he said.

“Me, personally? I think over the course of time that’s going to happen,” Sumlin said. “With our move to the SEC, scheduling has become a real issue.”