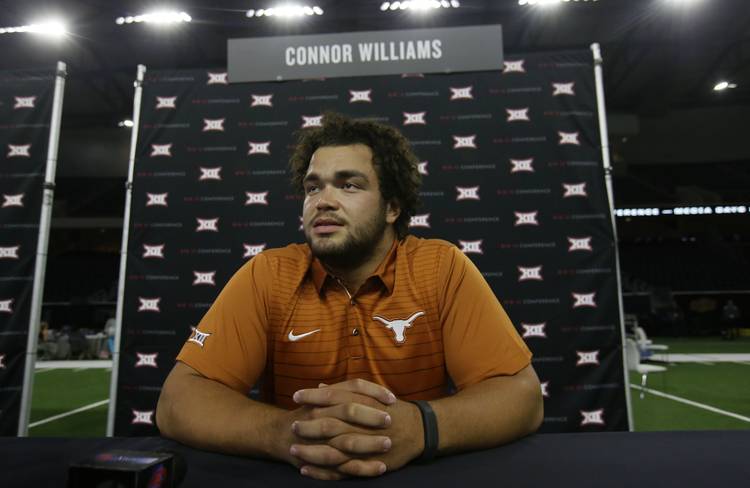 FRISCO — Texas quarterback Shane Buechele will enter this season as a longshot candidate for the Heisman Trophy. Tom Herman, though, argued on Tuesday that he may have another contender on his roster.

Appearing at the Big 12 Media Days, Herman was asked by KXAN’s Chris Tavarez if Connor Williams should be in the Heisman discussion. Williams, a junior offensive lineman, is an All-American who is projected as a first-round pick in the 2018 NFL Draft. Bleacher Report’s Matt Miller reported this spring that Williams has allowed one sack over the past two years. He blocked last year for a 2,000-yard rusher and a quarterback who threw for nearly 3,000 yards.

So, could Williams win the Heisman Trophy?

“I don’t see why not,” Herman said. “The way that I understood the Heisman Trophy was to be awarded to the player, regardless of position, that had the best season. Best is obviously subjective, but the best season. I’d determine that as maybe the most impactful season for his team.”

Sitting across the interviewing area at the Ford Center from Zach Sinor — an Oklahoma State punter who had launched his own Heisman campaign — Williams was not as bullish about his chances. Williams pointed out that an offensive lineman had never won the award. In fact, a lineman last logged a top-10 finish in the voting for the Heisman Trophy in 2001 when Miami’s Bryant McKinnie placed eighth.

“I think the Outland’s the Heisman for the offensive line,” said Williams, referring to the lineman award last won by a Longhorn in 1977.

Earl Campbell and Ricky Williams are the only Longhorns who have ever won the Heisman Trophy. Many UT fans will argue that former quarterback Colt McCoy should have joined that club in either 2008 or 2009.

While making his case for Williams on Tuesday, Herman also disagreed with the voting results in 2009. He, however, didn’t throw his support behind the third-place McCoy. (Alabama running back Mark Ingram won the Heisman Trophy that year).

Herman argued that Nebraska defensive lineman Ndamukong Suh earned the Heisman Trophy in 2009. Herman was an offensive coordinator for an Iowa State team that beat Nebraska 9-7 that year. Suh, though, blocked two kicks and helped keep the score close in a game in which Iowa State won an 8-0 decision in the turnover battle.

Suh finished fourth in the voting.

“That was the most dominant football player I had ever seen (in college football), probably still to this day,” Herman said. “He didn’t win the Heisman, and I didn’t know why. Is it because he played defensive line? I don’t know.

“I hope that eventually we get back to that award going to the most dominant player, best player, most impactful player in college football. Can that be an offensive lineman? Certainly.”