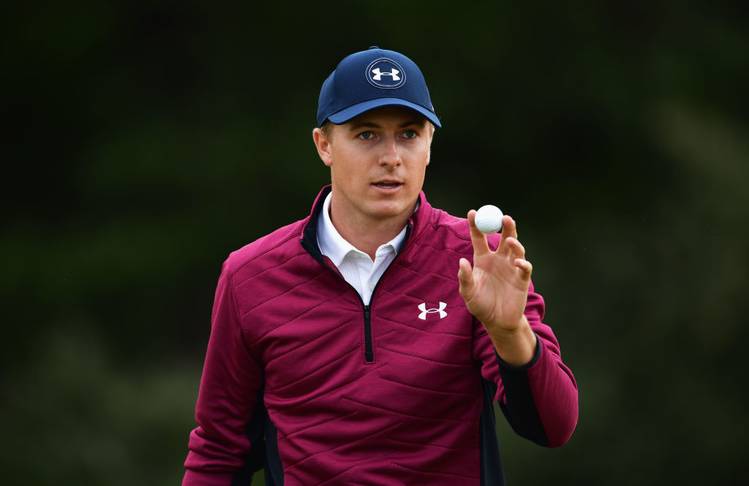 Jordan Spieth of the United States celebrates a birdie on the 12th hole during the second round of the 146th Open Championship at Royal Birkdale on July 21, 2017 in Southport, England. (Photo by Stuart Franklin/Getty Images)

Jordan Spieth is in hot pursuit of his first Claret Jug.

After sharing the lead through the first round of The Open Championship, Spieth fired another low round Friday to take a two-shot lead at Royal Birkdale Golf Club in Southport, England. The two-time major champion who played at Texas in 2012 sits at 6 under par after shooting 1-under 69 in the second round.

It wasn’t the same kind of masterpiece as his bogey-free round on Thursday, but Spieth overcome difficult conditions and four bogeys to stay in the red. Along the way came a slew of highlight-reel moments.

After a birdie at hole No. 1, Spieth made a pair of bogeys on the front nine to shoot 1-over 35. He saved a stroke at No. 8 when he drilled this 15-foot putt for par.

RELATED: Golden: No time to panic when it comes to Jordan Spieth

Jordan Spieth drains a 15ft par putt on No.8 to remain tied for the lead at 5-under. Fearless. 👊🏼 #TheOpen pic.twitter.com/VZ1c7SgDyi

The real fun started at No. 10, where Spieth found himself out of position behind the green. Facing a likely bogey or worse, he instead chipped in for a par save in the pouring rain.

He followed that up with back-to-back birdies, starting with this long-range effort at No. 11 that moved him to even par on the day.

Jordan Spieth from deep. But the call could have used a little Mike Breen: "Bang!" #TheOpen (🎥 @GolfChannel) pic.twitter.com/xPXJ8LXR3S

Spieth dropped a shot with a bogey at No. 14, but shocked everyone — including himself — with his approach into the par-5 15th. Wielding a fairway wood in the left rough, his shot came out low but rolled nearly 100 yards before coming to rest on the green.

RT SInow "RT golf_com: Maybe it's luck? Maybe it's not. It's just Jordan Spieth running away from the field: pic.twitter.com/PHGebQOYG7"

He capitalized on his good fortune, making the eagle putt for a three-shot lead.

Even Spieth’s caddie, Michael Greller, seemed to be enjoying himself despite wet and windy conditions and a faulty umbrella.

We all should strive to be as happy as @JordanSpieth caddy fixing his umbrella 😂 pic.twitter.com/c9qthLsyen

A bogey at hole No. 16 pulled Spieth back to 6 under, but he stayed there with a pair of finishing pars. At the time he finished his round, he held a two-shot lead over Matt Kuchar.

Of the other former Longhorns in the field, Brandon Stone (5 over) was the only one to make the cut. Dylan Frittelli shot 8 over for the tournament and Jhonattan Vegas fired 11 over.

Tristan Thompson and Khloe Kardashian are househunting in L.A.

Could Major Applewhite be hired as the new coach at Ole Miss?