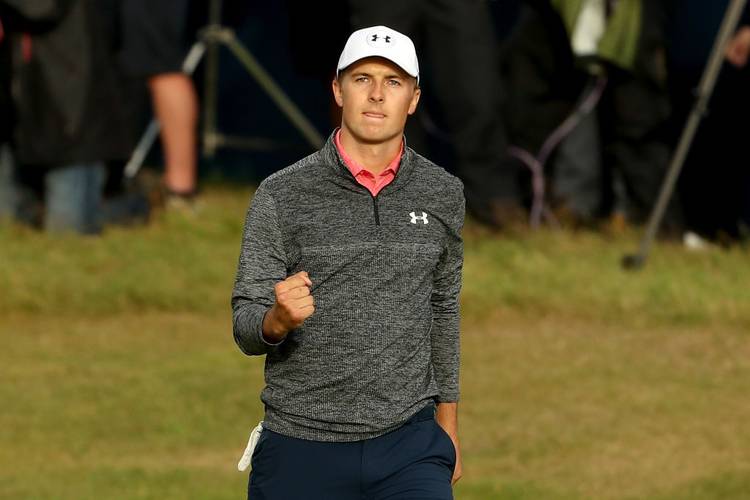 Jordan Spieth of the United States celebrates a birdie on the 18th green during the third round of the 146th Open Championship at Royal Birkdale on July 22, 2017 in Southport, England. (Photo by Christian Petersen/Getty Images)

For the second time in three rounds, Jordan Spieth stayed bogey free on his way to shooting 5-under-par 65 during The Open Championship at Royal Birkdale Golf Club in Southport, England. Heading into the final round Sunday, Spieth (11 under) leads fellow American Matt Kuchar (-8) by three shots.

Conditions were much better Saturday than they were Friday, when Spieth battled wind and rain on his way to a 1-under 69. He still carried a two-shot lead heading to the first tee, and five birdies — including one on the final hole — gave him an even larger cushion as he pursues his first Claret Jug and third major overall.

RELATED: Highlights from Jordan Spieth’s 2nd round at The Open Championship

The former Longhorn took advantage of nearly perfect conditions starting on the third hole, when he stuck his approach within inches of the hole for a tap-in birdie.

A feast of golf! @jordanspieth joins the action with a great approach at the 3rd. For more videos visit https://t.co/Y0Ljiq6Hze. #TheOpen pic.twitter.com/ibmGhtDQOg

Back-to-back birdies followed at hole Nos. 7 and 8, but Kuchar pulled within one shot with a long birdie putt at No. 14.

He's rollin' and just 1-back of Spieth. #TheOpen pic.twitter.com/Y5H5IMi4DF

They both birdied the next hole, and then after Kuchar made double bogey at 16, Spieth drilled a long birdie putt on the closing hole.

Three shot lead! @jordanspieth has the advantage heading in to Round 4. For more videos visit https://t.co/Y0Ljiq6Hze. #TheOpen pic.twitter.com/G6drB70d9Z

Spieth and Kuchar will be paired together again on Sunday, with 20-year-old Canadian Matt Connelly the next closest on the leaderboard at 5 under. Earlier Saturday, Branden Grace made history by becoming the first player to ever shoot 62 at a major tournament.

Brandon Stone, the only former Longhorn other than Spieth to make the cut, shot 2-under 68 to move into a tie for 43rd. He is 3 over par for the tournament.