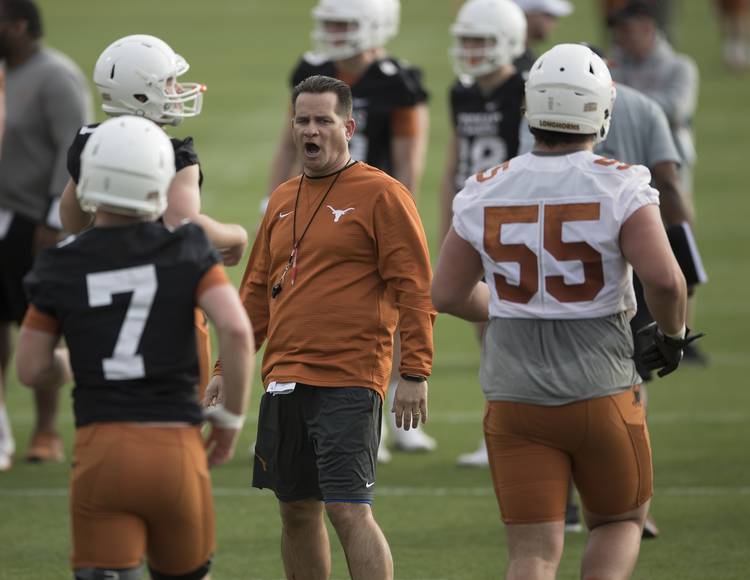 HOUSTON — The Longhorns will start practice on July 31 but won’t start the season until Sept. 2 against Maryland. That’s a long time for quarterbacks Shane Buechele and Sam Ehlinger to throw a lot of footballs.

Texas offensive coordinator Tim Beck acknowledged Monday that he’s spoken with both players about their practice snaps and “taking care of their arm” throughout August. And he refuses to say whether Buechele, the returning starter, will be the No. 1 option against the Terps.

“First of all, we have fall camp and the quarterback that plays the best in fall camp is going to be the quarterback,” Beck said Monday at the Texas High School Coaches Association’s annual coaching convention. “That’s first and foremost is finding a guy that’s going to lead our football team to victories, whoever that is.”

Beck said both players will have “ample opportunity to prove to the staff and the team who’s that guy.”

Dead arm is a real thing, something former UT offensive coordinator Sterlin Gilbert worried about last year. The Horns even curtailed some of Buechele’s workload last August just to be on the safe side.

At Big 12 media days last week, UT coach Tom Herman said he “doesn’t put a lot of stock” in how players perform wearing just T-shirts and shorts. Neither does Beck.

Buechele, a sophomore from Arlington, proved himself a more accurate passer this spring while Ehlinger, the early enrollee from Westlake, was a better runner.

Herman will use quarterback-turned-receiver Jerrod Heard in emergencies only.

The Longhorns’ quarterback depth chart will look radically different in 2018, though. Buechele will have two years of experience, Ehlinger will have one and UT will add recruits Cameron Rising and Casey Thompson.