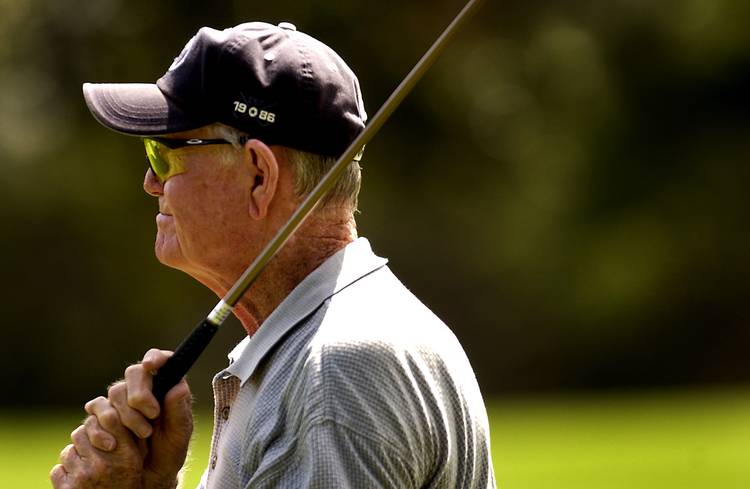 7/1/04 Ralph Barrera/AMERICAN-STATESMAN; The legendary Darrell Royal, of the University of Texas fame, is turning 80 years old. We take a look at his life as he approaches this birthday milestone. He spents the better part of his days playing golf at Barton Creek Country Club. Coach Royal watches his approach shot on the par 4 sixth hole at the Crenshaw course during a recent round. (Robbins story)

Darrell Royal is the greatest head football coach to ever lead the Longhorns, and first-year coach Tom Herman will have to do a lot, and stick around a long time, to ever catch him.

During his time, Royal won two undisputed national championships, shared another one and had seven 10-win seasons. Royal dominated Texas A&M, went on long winning streaks against Oklahoma and Arkansas and coached in some of the most historic games in Longhorn history.

Darrell Royal is a legend.

By 1976, Royal was the head coach and athletic director at Texas and the stressful 1976 season would be his final one as head coach.

Armed with two of the greatest running backs (one later starred at receiver) in Longhorn history, Earl Campbell and Johnny “Lam” Jones, Texas entered the 1976 season ranked No. 7 in the nation.

But Texas was looking for a quarterback to replace Marty Akins, and struggled to do so. Texas quarterbacks threw 14 interceptions on 108 attempts.

Also not helping was Campbell being limited to just seven games– he still rushed for 653 yards, a team high and three touchdowns. Johnny “Lam” Jones (because he was one of three Jones on the team, and was from Lampasas, thus “Lam Jones”) added 624 yards and five touchdowns.

The most accomplished Longhorn kicker of all-time, Russell Erxleben, was on the roster.

Injury problems, yes. But the 1976 Longhorns didn’t have a talent issue.

Whatever the problem, Royal’s final squad was his worst. Texas began the season ranked No. 7 in the polls and finished 5-5-1 and unranked. The first non-winning season since 1956– the last season before Royal took over.

There’s little doubt that if Royal, just 52 at the time, wanted to keep coaching beyond the 1976 season, he could have. But Royal left after the 5-5-1 season on his own terms.

In his final season, Royal snapped a five-game losing streak to Oklahoma with a 6-6 tie. A 1982 Texas Monthly article had this little tidbit from that game:

(Barry) Switzer was the only opponent who ever baited (Royal) successfully. In more ways than one, OU had his number. The week before the 1976 Oklahoma game, Royal claimed that his staff had apprehended an OU spy in Memorial Stadium during a closed Longhorn workout. In the ensuing black comedy, Royal challenged Switzer, an OU assistant, and the alleged spy to take polygraph tests, offered them each $10,000 in cash if they could pass, and let slip to an AP reported his assessment of the Norman crowd as a lot of “sorry bastards.” Switzer just baited him more. “This is Secret Agent Aught-aught-six,” he told Blackie Sherrod of the Dallas Times Herald. “Six, because we’re fixing to strap it on them for the sixth straight year.” But Switzer didn’t appreciate the name-calling. “Listen, I don’t care what Darrell Royal thinks of me,” he told Sherrod. “Let him think Oklahoma all the time. Let him look for ghosts.” OU fans outside Royal’s Dallas motel room kept him awake with a chant of “Sorry bastard, sorry bastard.” They booed their onetime All-American quarterback and taunted him with the same chant in the Cotton Bowl the next day. Thanks to a brilliant game plan drawn up by defensive coordinator Mike Campbell, Royal’s team played the more talented Sooners off their feet. They had a shutout in their grasp, but then a Texas back fumbled; Oklahoma capitalized, then botched the extra point. Nobody went home happy with the 6-6 tie. Least of all Royal, whom a photographer caught stooped over with the dry heaves.

Later in the season, following a 31-28 loss to Texas Tech– a game in which Earl Campbell suffered another leg injury– Royal informed UT Chancellor Charles LeMaistre that he wouldn’t be returning for the 1977 season.

After losing to Texas A&M 27-3, Royal announced before the Arkansas game he would be retiring after the season. It was fitting his last game would be against Arkansas. Razorback coach Frank Broyles had already announced his retirement, and Royal’s biggest win, and probably greatest coaching job came against Arkansas in 1969 during the “Game of the Century.”

In a game where five minutes were lost do to a clock malfunction, Texas beat Arkansas 29-12 in Austin for his last game ever.

Texas would be returning the makings for one of the program’s greatest teams, the 1978 squad. A fact that defensive coordinator Mike Campbell noted when trying to dissuade Royal from retiring. But it didn’t work. Royal stepped down and became the athletic director, but his first big hire wouldn’t really be made by him.