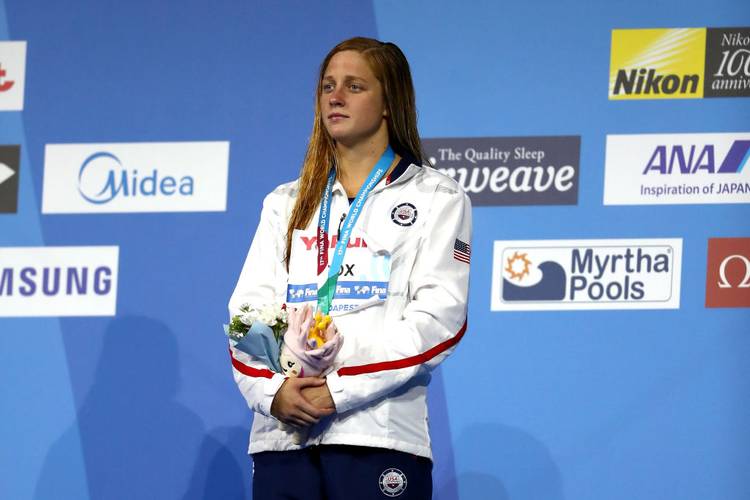 Madisyn Cox of the United States celebrates her bronze medal in the Women's 1500m Freestyle Heats on day eleven of the Budapest 2017 FINA World Championships on July 24, 2017 in Budapest, Hungary. (Photo by Al Bello/Getty Images)

Former Texas swimmer Madisyn Cox surged onto the podium with a strong finish and Longhorns senior Joseph Schooling claimed fifth in his first race at the 2017 FINA World Championships on Monday in Budapest, Hungary.

After falling all the way to seventh following the butterfly and backstroke legs of the 200-meter individual medley, Cox completed one of her trademark comebacks to reach the medal stand. She remained in sixth following the backstroke, then blazed through the final 50 meters of freestyle in 30.45 seconds to edge American teammate Melanie Margalis for bronze by 11 one-hundredths of a second.

Madisyn Cox wins BRONZE in the 200 IM at the World Championships! #FINABudapest2017 pic.twitter.com/hyUTvESApy

In the men’s 50-meter butterfly, Schooling placed fifth in the final with a time of 0:22.95. Schooling, who won the first gold medal ever for his nation of Singapore in the 100 fly at the 2016 Olympic Games in Rio, will compete next in the 100 free starting Wednesday.

Texas junior Townley Haas earned a spot in the 200-meter freestyle finals by qualifying fourth in Monday’s semifinals with a time of 1:45.43. He’ll compete in the finals on Tuesday, which begin at 10:30 a.m. on NBC Sports Network and NBCSports.com.