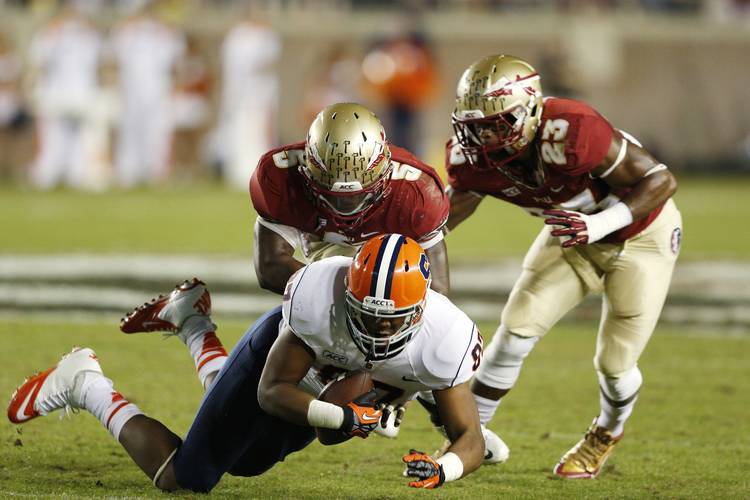 TALLAHASSEE, FL - NOVEMBER 16: Reggie Northrup #5 of the Florida State Seminoles makes a tackle against Kendall Moore #87 of the Syracuse Orange during the game at Doak Campbell Stadium on November 16, 2013 in Tallahassee, Florida. (Photo by Joe Robbins/Getty Images)

Texas coaches expect Kendall Moore, a graduate transfer from Syracuse, to enroll this summer. But it hasn’t happened officially yet, a team source said.

Asked about the tight end position at the Texas High School Coaches Association’s annual convention in Houston, Beck said the coaching staff evaluated the players they had through 14 spring practices and the Orange-White game.

“There are some young players that came in, (and) we’ve got a graduate transfer, so there are some situations there that that position’s going to be looked at to see who can help us in there,” Beck said.

UT coach Tom Herman has expressed serious concern over the depth at tight end for months. Senior Andrew Beck, who has 16 career starts, has a fairly long injury history. Peyton Aucoin transferred out.

It was unclear whether freshman Reese Leitao would be allowed to join the program after pleading guilty to misdemeanor drug possession. But UT athletic director Mike Perrin allowed him to keep his scholarship. Herman said Leitao will be suspended for the first two games.

Moore would add quality experience. He had 14 catches for 150 yards and two touchdowns in 37 career games with the Orange. He missed the last eight games in 2015 due to injury.

Top opponents for Texas in 2017, No. 40: Baylor RB Terence Williams