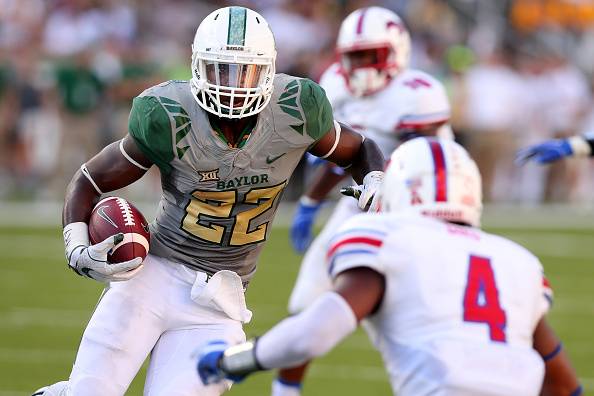 WACO, TX - SEPTEMBER 10: Terence Williams #22 of the Baylor Bears carries the ball against the Southern Methodist Mustangs in the second half at McLane Stadium on September 10, 2016 in Waco, Texas. (Photo by Tom Pennington/Getty Images)

The Big 12’s third-leading returning rusher might be a little under the radar by the time Texas rolls into Waco. Baylor coach Matt Rhule announced at Big 12 media days that Terence Williams will miss at least the first three games due to off-season shoulder surgery. Even if his stats are down, Williams should still be one of the league’s best in 2017. The 6-foot-1, 220-pound back from Ennis rushed for 1,048 yards and 11 touchdowns and had a 5.7 yards per carry average last season.

The Longhorns — and their fans — already know what Williams can do. Despite not touching the ball for most of the first quarter, he finished with 24 carries for 180 yards and a touchdown at Royal-Memorial Stadium. He’ll have most of his offensive line back, including 6-5, 310-pound Patrick Lawrence, and under Rhule the Bears should be run-first. Williams does a lot of his damage between the tackles, but he has plenty of top-end speed once he gets past the second level. He’s also not afraid of contact. At all.

Tom Herman hasn’t been eager to watch much film of the Longhorns of 2016, but he might want to pull this one out before Oct. 28. Texas missed a lot of chances to bring Williams down. New defensive coordinator Todd Orlando won’t accept arm tackling, but it takes full effort to bring down the Bears’ main weapon.