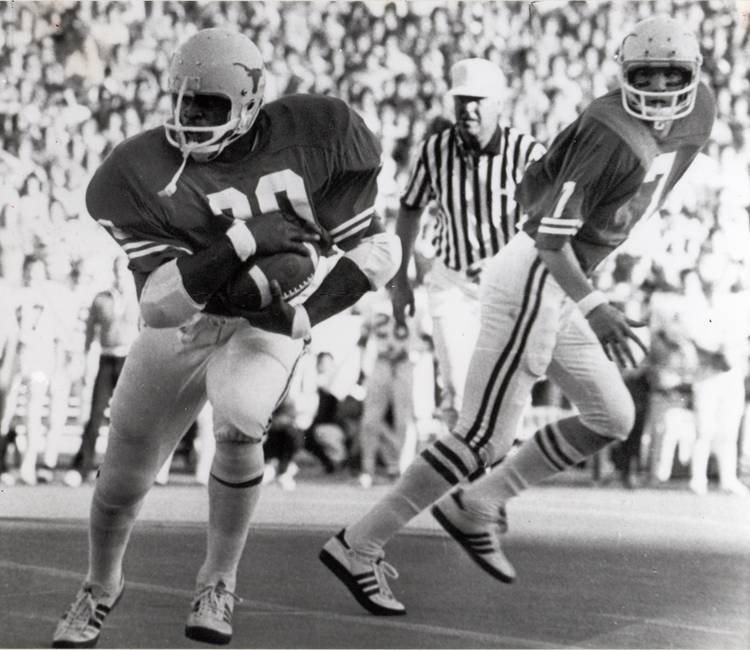 Hand out photo courtesy of the University of Texas Athletics Department of Earl Campbell in a 1977 game against Baylor. Received 09/25/07.

Where to start with the 1977 season, truly one of the greatest, drama-filled and one-of-kind seasons in Texas football history.

We’ll start with some drama.

After Darrell Royal announced his retirement before the December finale against Arkansas, speculation arose of who would replace him. Whoever was getting the job was inheriting tons of talent on both sides of the ball– talent that took its lumps in 1976 as Texas searched for a capable quarterback and battled through injuries. The coach would be getting a clear Heisman candidate and generational talent in Earl Campbell, who had a lost junior season thanks to nagging leg injuries.

The Tyler Rose, though, was back for his senior season.

Who would get he job? The major in-house candidate was Mike Campbell.

It made so much sense for Texas to elevate Mike Campbell to head coach. For starters, Royal wanted Mike Campbell to follow him. He certainly had earned the chance to be the head coach. For 20 seasons he was one of Royal’s top assistants. The Mississippi State alum served officially as the defensive coordinator during the 30-game winning streak of the late 1960s and early 1970s. Some of Texas’ best defenses were led by Mike Campbell, the unquestioned greatest defensive coordinator in Longhorn history.

There was a bond between Royal and Mike Campbell, and longtime right-hand man was said to have pleaded with Royal not to retire because he knew how good the 1977 team could be.

Outside of Mike Campbell, there was another great choice.

Following the 1974 season, co-offensive coordinator Fred Akers left to become the head coach at Wyoming. That turned out to be one of the smartest moves he ever made. Akers had been on Royal’s staff from 1966 to 1974, had worked with Emory Bellard to produce one of the greatest rushing attacks in college football history and was by-in-large well liked.

Texas couldn’t have gone wrong with either Akers or Mike Campbell.

But Akers had separated himself in the eyes of some fans because he now had the head coaching experience.  In his first season with the Cowboys, he went 2-9, but his second season saw a six game improvement with an 8-4 record and Fiesta Bowl appearance.

Royal still wanted Mike Campbell, but even as the athletic director, he couldn’t just hire him because Akers had support from several regents, notably Allan Shivers.

Texas hired Akers. Much of a rumored feud between Akers and Royal was blown out of the water. Akers told Hookem.com in 2015 :” (Royal) had all he would want in coaching in football. He’s not going to interfere with what they’re doing over in the Tower. So, no. My goodness. I ran miles and miles with him recruiting. That was good.”

So who is Fred Akers? A native of Arkansas, like another former Texas coach Charlie Strong, Akers played for the Razorbacks (yeah, first a Sooner as head coach then a Razorback) and joined the Arkansas staff as a graduate assistant in the late 1950s. Akers then left Arkansas and his home state to begin a career as a Texas high school football coach. Akers coached at Port Arthur as an assistant before moving to Edinburg, where he was 19-9-1 as head coach. Akers then left to take over Lubbock High, where he went 7-3.

Akers was familiar with many of the players already at Texas. He coached Earl Campbell as a freshman and wasn’t blindly walking into the program in 1977.

His first year is the greatest first year any Texas coach has ever had.

It’s also one of the single greatest individual seasons in program history.

Earl Campbell is one of the best Longhorns to ever wear burnt orange. A case could be made that he is the very best. He undoubtedly is the most dominant running back in Texas history — including Ricky Williams.

Running backs had long dominated the Heisman Trophy award, and in the 1970s, some of the greatest college running backs ever won the award. Ohio State’s Archie Griffin won it twice. Pittsburgh’s Tony Dorsett won the award in 1976. Nebraska’s Johnny Rodgers, Penn State’s John Cappelletti, Oklahoma’s Billy Sims and USC’s Charles White would all win Heisman’s in the 1970s as running backs.

Campbell may have been better than all of them (though Dorsett could be on a short list for greatest college football player of all time) and he was the only one of those running backs who also went No. 1 overall in the NFL Draft.

In 1977, Campbell rushed for 1,767 yards, 6.5 yards per carry, and 18 touchdowns. He averaged 158 yards per game. Those numbers are through 11 games. Sure D’Onta Foreman had more yards in 2016, but Foreman’s team didn’t go 11-0 in the regular season. And Foreman also didn’t have a running back like Johnny “Ham” Jones taking some carries.

Part of the success was a switch in the offense under new coordinator Leon Manley. When Royal retired, Texas retired the wishbone. As effective as the wishbone was, and it was, it spread the carries out to a number of backs. The new offense, the I-formation, which Nebraska and Tom Osborne had started to run, didn’t spread the ball as much, and had more of a passing element to it. Johnny “Lam” Jones was moved from running back to receiver and caught 21 passes for 543 yards– or 25.9 yards per catch for math people — and seven touchdowns.

Texas also settled on a quarterback in Randy McEachern, who threw for 906 yards and eight touchdowns, completing 50.6 percent of his passes.

The defense, now led by coach Leon Fuller (who would also become one of the most popular assistant coaches in Texas history) was loaded. Johnnie Johnson, Glenn Blackwood, Mike Hartinger, Steve McMichael, leading tackler Lance Taylor, All-American Brad Shearer, Bill Acker and Rick Churchman and more were all members of this defense.

Shearer would go on to win the Outland Trophy, the first Longhorn since Tommy Nobis to do so. The Westlake High School product had 109 tackles and seven sacks. That’s 109 tackles for a defensive lineman!

Akers won his first game 44-0 against Boston College. The Longhorns were ranked No. 18 in that game. A 68-0 win over Virginia in the following week made for one of the greatest starts ever to a Texas coaching career in any sport. In two games, Texas had outscored opponents 112-0.

The big challenge was a two-week stretch  against No. 2 Oklahoma and  No. 8 Arkansas. Texas beat Oklahoma 13-6. The Longhorns beat Arkansas, now coached by Lou Holtz, 13-9 on the road.

The similarities between 1977 Texas and Arkansas teams are crazy. Both teams were replacing legendary head coaches who were now running the athletic department and both teams would go 11-1 on the season.

Following a win over SMU, Texas went to No. 1 in the nation and would stay there until the bowl game.

Texas wrapped the season up a perfect 11-0 with a 57-28 win over No. 12 Texas A&M that snapped a two-year losing streak to the Aggies.

That December, Earl Campbell beat out nine other players receiving votes to win the 1977 Heisman Trophy. Earl Campbell became the first Longhorn since the New York Athletic Club began handing the trophy out in 1935 to win the award.

Texas was then invited to the Cotton Bowl to play No. 5 Notre Dame for the third time since 1969. A win would give Texas its fourth national title since 1963. But it wasn’t meant to be.

The rubber match against Notre Dame was not good for Texas. The Longhorns beat Notre Dame in 1970, lost in 1971 and on Jan. 1, 1978, lost 38-10 to the Fighting Irish. Notre Dame (11-1 overall) was named the Associated Press National Champions. The loss dropped Texas to No. 4 in the poll.

Overall, Texas had the Heisman and Davey O’Brien trophy winner (Campbell) and the Outland Trophy winner (Shearer). The Longhorns won an eighth Southwest Conference title since 1968 and Campbell became the first Longhorn taken No. 1 overall in the NFL Draft since Tommy Nobis.

The American-Statesman’s Top 25 countdown: No. 5 Clemson