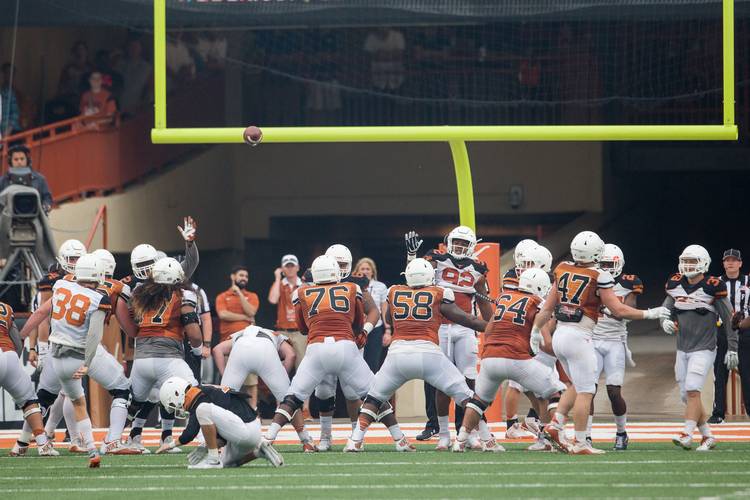 Mitchell Becker kicks for the extra point during the 2016 University of Texas Orange-White Game April 16, 2016. Tom McCarthy Jr. for AMERICAN-STATESMAN

Let’s use Texas’ roster, history and scouting reports to countdown to the start of the 2017 football season. Today, we are only 38 days away from Texas’ home game against Maryland.

Which Longhorn wears No. 38? Senior K Mitchell Becker. Last year, Becker averaged 63.0 yards per kickoff and he nailed 24- and 31-yard field goals against TCU. Becker, LB Naashon Hughes and DB Antwuan Davis are the only current Longhorns who were on Mack Brown‘s last team.

Fun fact about No. 38: The UT record for yards-per-reception is held by Herkie Walls, who was a Longhorn from 1979-82. Walls caught 38 footballs during his career, but his 981 yards calculated out to an average of 25.8 yards. Sophomore Devin Duvernay’s 20.6 yards-per-catch leads all current Longhorns.