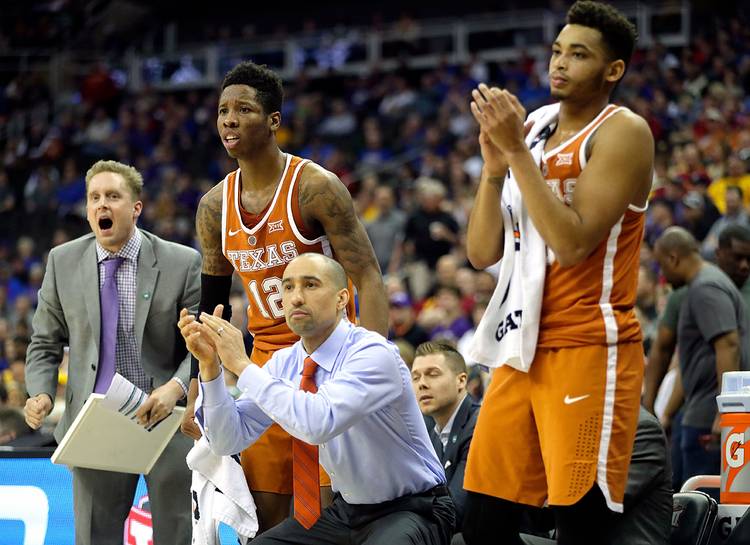 Head coach Shaka Smart of the Texas Longhorns reacts from the bench alongside players during the quarterfinal game of the Big 12 Basketball Tournament against the West Virginia Mountaineers at the Sprint Center on March 9, 2017 in Kansas City, Missouri. (Photo by Jamie Squire/Getty Images)

Texas officials have finalized the itinerary for the men’s basketball team’s upcoming trip to Australia. It’s clear this will be no free-wheeling junket.

The Longhorns are leaving Aug. 12 for a 12-day tour through Australia and will play four professional teams during that stretch.

The team will leave Austin and arrive in Melbourne on Aug. 14. Coach Shaka Smart’s team will play the Dandenong Rangers at 7 p.m. local time on Aug. 15. Australia is 17 hours ahead of the Central time zone, so the tipoff time back home will be 4 a.m.

The next day, the Longhorns will tour the Royal Melbourne Zoo and then face Melbourne United at 7 p.m. on Aug. 16.

Texas will travel to Carins on Aug. 17 and play the Cairns Taipans at 7 p.m. on Aug. 18. The next day will bring a tour of the Great Barrier Reef, and then it’s on to Sydney.

The final game is scheduled against the Wollongong Hawks at 7 p.m. on Aug. 21. The team will spend another day in Sydney and then head home on Aug. 23.

Melbourne, Cairns and Wollongong all play in Australia’s National Basketball League. Dandenong plays in the Australia State League, which is one level below Australia’s NBL.

Smart has taken a completely different approach to this international trip than he did two years ago to China. Texas was merely the visiting team in a Pac-12-driven event against Washington. Smart was new inside the UT ecosystem and simply wanted to get the game over as fast as possible.

This time around, the Longhorns are participating in a five-week class worth one credit hour on Australian history and culture, the school said.