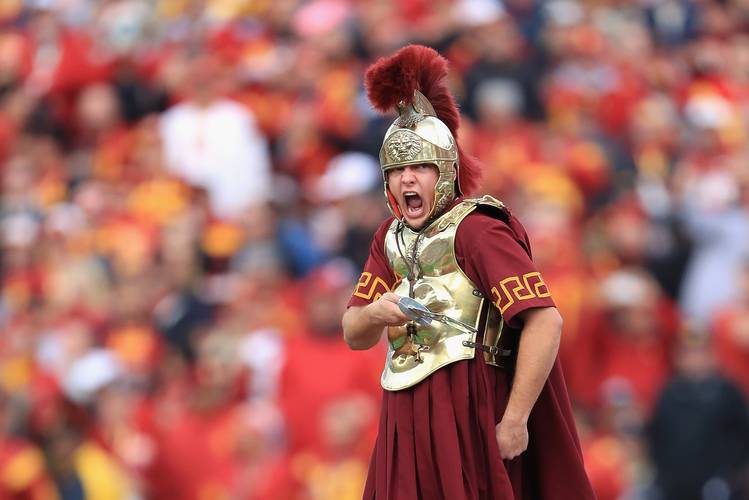 PASADENA, CA - JANUARY 02: The USC Trojans mascot performs on the field prior to the 2017 Rose Bowl Game presented by Northwestern Mutual between the USC Trojans and the Penn State Nittany Lions at the Rose Bowl on January 2, 2017 in Pasadena, California. (Photo by Sean M. Haffey/Getty Images)

Best-case scenario: It’s hard to see how head coach Clay Helton can screw this up. Quarterback Sam Darnold was a freshman All-American and 13 starters return from a Rose Bowl championship team. And that was after the Trojans started 1-3 last season. Darnold, running back Ronald Jones II and wide receiver Dontay Burnett make up the core of a unit that averaged 34.4 points a game.

Worst-case scenario: There are some defensive holes. Adoree Jackson, last year’s Thorpe Award winner, is one of several key starters that are gone. Granted, USC returns its two two tacklers in Clancy Pendergast’s multiple system. Still, teams may try to establish the run early. Can defensive tackle Rasheem Green plug up the middle the way Stevie Tu’ikolovatu did?

The key game: Sept. 16, Texas. How could it be anything other than the rematch of the 2005 national championship game? It’s already being hyped on USC’s own website (“The Coliseum will be shaking on September 16”). The Texas game is sandwiched between Pac-12 dates with Stanford and Cal.

Spring cleaning: Lost in the hubbub over Darnold is the fact that USC lost both starting tackles in Banner and Wheeler, and LG Damien Mama — a two-year starter — also is gone. That’s three important cogs in the machine. RG Viane Talamaivao and C Nico Falah are back, and Toa Lobendahn is USC’s do-it-all lineman with 21 career starts at four different spots. This unit will be one to watch throughout August. … USC’s 2017 signing class ranked fourth in the country and included two five-star prospects in California QB Jack Sears and Oregon DT Marlon Tuipulotu.

Mr. Heisman?: College football can turn anyone into a star. This time last year, Darnold was an untested backup. Now, he’s the odds-on favorite to win the Heisman Trophy, according to Las Vegas. Bovada moved Darnold just ahead of Oklahoma’s Baker Mayfield to win the award. Such is life after leading the Trojans to nine straight wins after a 1-3 start.

There’s a catch: The one big question facing Darnold and the offensive staff may be at receiver. Burnett certainly had a strong season, but he wasn’t the dynamic playmaker that Smith-Schuster was. There’s a bevy of options, but it’s unclear who will become the go-to target in crunch time. Could that become five-star recruit Joseph Lewis?

Swann’s song: USC athletic director Lynn Swann is learning what former Texas AD Steve Patterson once faced. People hate change. USC will start a major renovation project inside the Coliseum in 2019, something that will reduce stadium capacity by about 16,000 seats. Higher donations will be required, too. In a message to fans, Swann wrote, “Change is inevitable in any renovation and necessary in our situation.”

A&M Chancellor John Sharp: ‘I’d like to put the Texas-A&M game back together’

24 ways to celebrate Jordan Spieth’s birthday like a pro