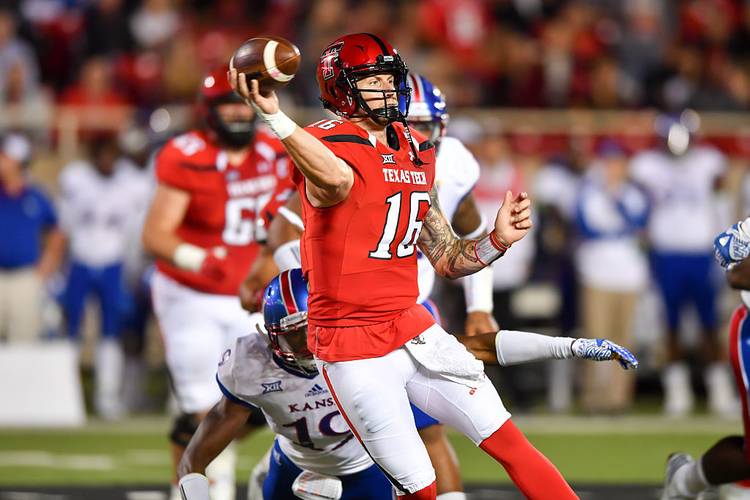 Nic Shimonek #16 of the Texas Tech Red Raiders passes the ball under pressure during the game against the Kansas Jayhawks on September 29, 2016 at AT&T Jones Stadium in Lubbock, Texas. Texas Tech won the game 55-19. (Photo by John Weast/Getty Images)

No player in the Big 12 has bigger shoes to fill. Nic Shimonek only needs 10,770 passing yards to catch his predecessor, Patrick Mahomes III. Considering this is his final year of eligibility, that’s not going to happen. Then again, this is Texas Tech.

The 6-foot-3, 225-pound quarterback from Corsicana has the pedigree of a classic Red Raiders gunslinger. He started his career at Iowa, then left to walk on in Lubbock. To help his parents pay tuition, he started a furniture restoration business. Now, barring injury or suspension, he’s set to make his first college start when Texas Tech hosts Eastern Washington on Sept. 2.

By all accounts, the Red Raiders aren’t expecting much of a drop off. Opponents shouldn’t, either. He’s got a deep corps of receivers and all the physical tools coach Kliff Kingsbury could ask for. Tech fans will point to last year’s game against Kansas, when Mahomes got hurt and Shimonek kept the offense humming. He completed 15 of 21 passes for 271 yards and four touchdowns in a 55-19 win. Now the challenge will be to string together 12 performances like that.

Mahomes: “Obviously, Pat was one of the best, if not the best, quarterbacks in the history of the school. But I’m not looking to fill anybody’s shoes. I’m just going to do what I do: go out there and try to put my team in the best position to win that I can.”

Cameron Batson: “They have two different playing styles and Mahomes is the type of guy who loves the big play and Nic likes to hit the check downs and keep the drive alive. We have faith in Nic and we know he is going to get the job done.”