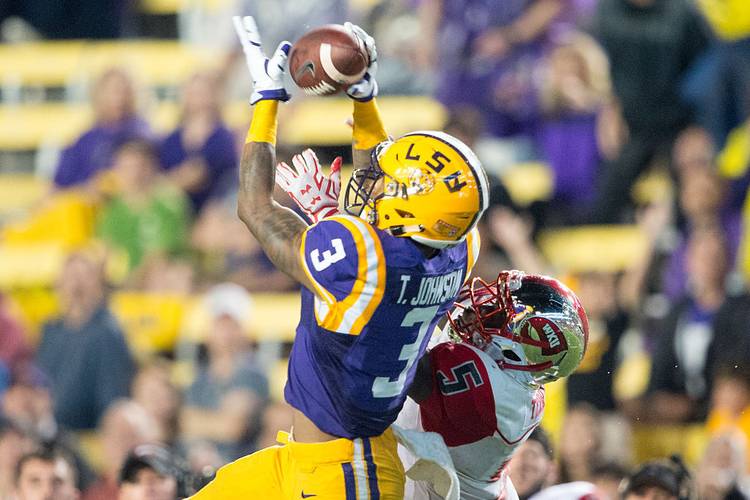 Wide receiver Tyron Johnson #3 of the LSU Tigers catches a pass over defensive back Wonderful Terry #5 of the Western Kentucky Hilltoppers on October 24, 2015 at Tiger Stadium in Baton Rouge, Louisiana. (Photo by Michael Chang/Getty Images)

There’s some speculation involved in placing Tyron Johnson this high, but it doesn’t take too much reading of tea leaves to understand how excited Oklahoma State is to get the LSU transfer on the field in 2017. Johnson is a 6-foot-1, 185-pound redshirt sophomore from New Orleans who was once a five-star recruit. Those don’t land in Stillwater very often, regardless of the circumstances.

Johnson drew rave reviews from teammates and coaches this spring, so it’s safe to say he’ll be in the rotation. The question for the Cowboys will be whether there are enough footballs for all their talented offensive weapons. Breakout star James Washington returns along with leading pass-catcher Jalen McCleskey, and Marcell Ateman is back from injury. The good news for all of them is that Mason Rudolph is the quarterback, and he’ll be throwing plenty.

Johnson didn’t play a ton as a freshman at LSU (nine catches, 150 yards), but he had some spectacular moments. The highlight reel above provides a nice rundown of his skill set. He’s fast with great instincts and hands, and he torched an SEC defense late in the season for a career-best five catches, 83 yards and a touchdown at Mississippi. Guarding Washington one-on-one will be nearly impossible for most, but shifting too much attention his way is just asking for trouble.

Cowboys coach Mike Gundy: “So far, whenever the lights come on and we keep score, he makes plays. In most team sports, there’s something to be said about that.”

Rudolph: “He’s a guy that you want to get the ball in space and he’s probably the best we have right now as far as making you miss with the defense in front of you.”