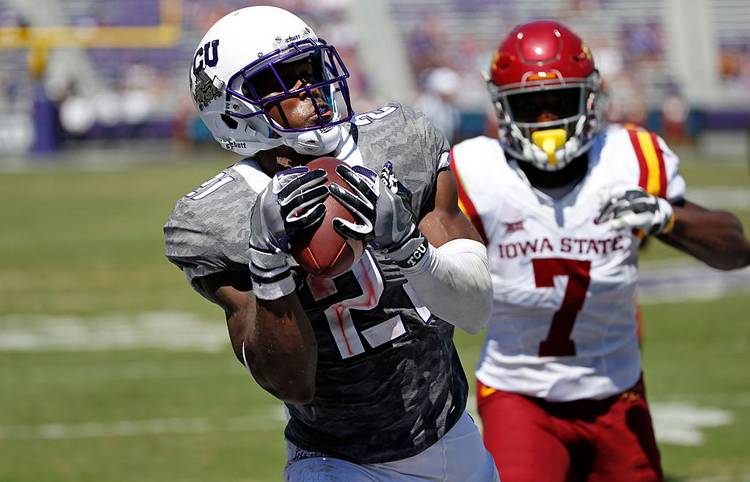 Taj Williams #2 of the TCU Horned Frogs catches a touchdown pass against Willie Harvey #7 of the Iowa State Cyclones during the second half at Amon G. Carter Stadium on September 17, 2016 in Fort Worth, Texas. TCU won 41-20. (Photo by Ron Jenkins/Getty Images)

In his TCU debut, Taj Williams caught 11 passes. Despite only grabbing 28 in his next 12 games, he still wound up the leading receiver on a Horned Frogs team that led the nation in dropped passes. So, which Williams will we see in 2017: the one who went for 210 yards and two touchdowns against Oklahoma, or the one who was kept completely silent in the Liberty Bowl?

At 6-foot-4, 193 pounds, Williams is as physically imposing a receiver as the Longhorns will face this season. He’s a big-play threat, with an 18.0 yards per catch average. Against the Sooners, his touchdowns came from 64 and 74 yards. You can certainly see how he was the No. 1-ranked wide receiver recruit coming out of junior college, where he racked up more than 1,500 receiving yards.

The American-Statesman’s Top 25 countdown: No. 1 Alabama