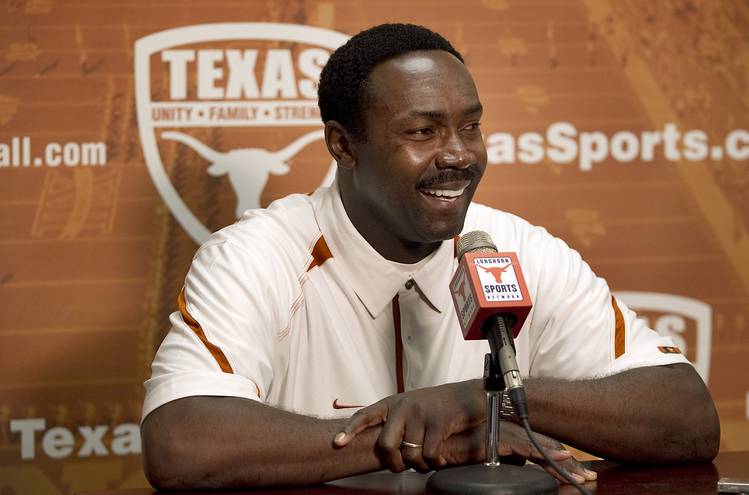 1/19/11 Ralph Barrera/AMERICAN-STATESMAN; Jerry Gray, most recently secondary coach with the NFL Seattle Seahawks, was introduced as the new secondary coach for the University of Texas Longhorn football team at a brief press conference at Moncrief-Neuhaus in the football offices. (Riggs story)

The Cotton Bowl disaster didn’t really have a hangover effect on the 1984 Longhorns, but Texas did take a step back in going  7-4-1 in 1984.

Texas opened the season ranked No. 6 in the preseason poll and won its first three games before tying Oklahoma 15-15 in Dallas. Then Texas bounced back to beat No. 4 Arkansas the following week 15-13.

The lowest point, however, came in the Freedom Bowl.

Played in Anaheim Calif., Texas faced Iowa, coached by Hayden Fry. The Hawkeyes were 7-4-1 entering the game and were led by quarterback Chuck Long.

Long passed for 461 yards and a then bowl record six touchdowns.

The game was an exciting one entering halftime with Texas trailing 24-17. But Iowa scored 31 points in the third quarter. Thirty-one. Iowa blew the doors off the Longhorns in one the worst losses in Texas bowl game history, 55-17.

Jerry Gray became one of 20 Longhorns to be name a unanimous All-American. He was joined by Tony Degrate and center Gene Chilton on the All-American team.

Now a successful defensive coordinator, Gray is a College Football Hall of Famer and graduated from Texas with 297 tackles and 16 interceptions. Gray made four Pro Bowls in a career that went from 1985-1993, mainly with the Los Angeles Rams. He began his coaching career in 1999 with the Tennessee Titans.

Gray came back to Texas in 2011 to serve as an assistant head coach and defensive backs coach before returning to the NFL. he has served as a defensive coordinator for the Tennessee Titans and Buffalo Bills and is currently the defensive back coach of the Minnesota Vikings.

Degrate was awarded the Lombardi Award in 1984, joining Kenneth Sims and Brian Orakpo as Longhorn winners. Degrate had 147 total tackles and 12 sacks en route to the award. He was selected in the fifth round of the NFL Draft by the Cincinnati Bengals, but never played with Cincinnati.

Texas finished the 1984 season on a three-game losing streak, and the seat was starting to get warm under coach Fred Akers.

Top opponents for Texas in 2017, No. 32: Oklahoma RB Rodney Anderson