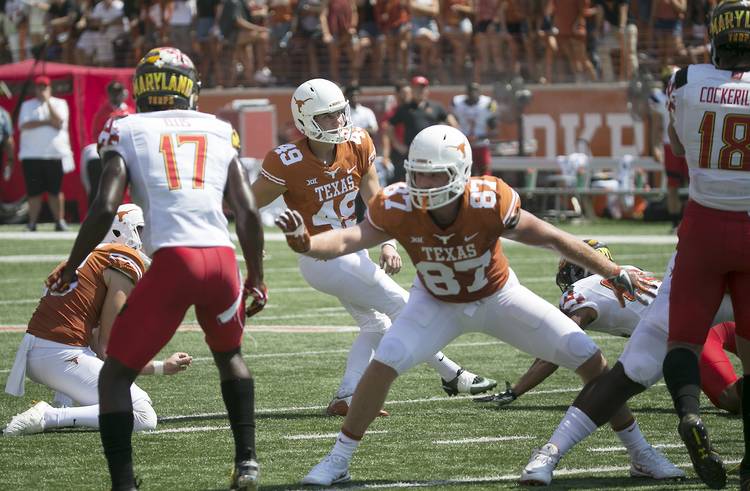 The first defensive touchdown in 20 games ushered in the new era of Texas football under Tom Herman.
Then the first half happened.
Turns out the Maryland Terrapins aren’t here to get punked. The Turtles have put a shock into the home crowd with a 30-14 lead at the half.

Quarterback Tyrrell Pigrome was the star of the first half with 104 yards passing and two touchdowns only five attempts. Remember that Texas team that gave up 31.5 points per game last season. They’re on pace to give up 60.
The Horns are in trouble but it’s a manageable trouble though history suggests they won’t get it done today.  According to ESPN Stats and Info, the Horns have lost 39 straight games when trailing by double digits. Ouch.

The defense electrified this hungry fan base when Holton Hill returned an interception 31 yards for a touchdown. Just like that the Horns were back. No one suspected that 18-point underdog Maryland, which went 6-7 last season, would score 27 unanswered points.
There was zero energy in DKR, that is until 5-foot-11 defensive tackle Poona Ford got his big mitt on a Maryland field goal attempt in the second quarter. Holton Hill scooped it up and scored his second TD of the day. That was about it for the scoreboard as far as Texas is concerned.

Where are the big play?

Shane Buechele got off to a slow start. On Texas’ first play from scrimmage, he had running back Kyle Porter open in the flat but hesitated and got splatted near the goal line. He completed a solid 17 of 22 passes for 143 yards but threw an interception. He was able to connect on short passes, most to Reggie Hemphill-Mapps, who caught five for 36 yards but went deep on only a few occasions, one of which was picked.
Worse yet, Maryland was able to get pressure with its front four. The Texas offense registered 171 yards but scored zero points.

Special teams not so special

“It’s like I was never fired,” tweeted Chuck F’N Strong, Charlie’s parody account. Hill’s return kept the first half from being a complete special teams no-show.