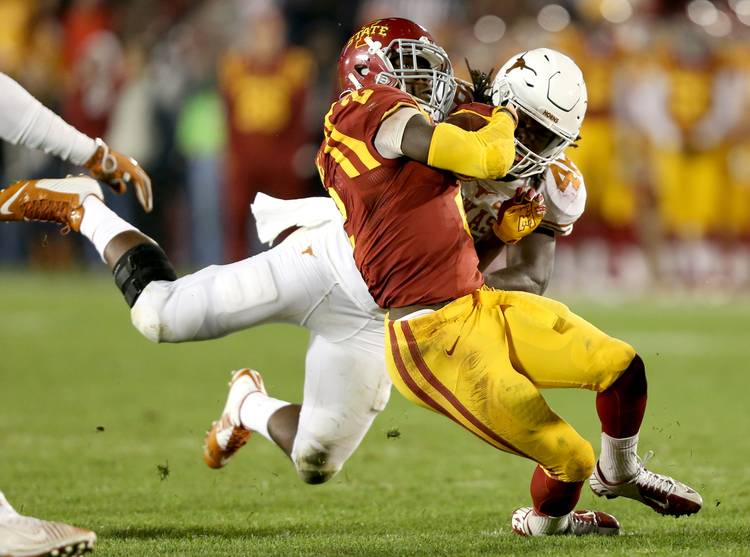 Iowa State running back Mike Warren is pulled down from behind by Texas linebacker Malik Jefferson during the second half of an NCAA college football game, Saturday, Oct. 31, 2015, in Ames, Iowa. Iowa State won 24-0. (AP Photo/Justin Hayworth)

Texas defensive coordinator Todd Orlando’s system will work only if Malik Jefferson and Anthony Wheeler continue to lead the way.

Just look at the numbers. Those two linebackers combined for 11 tackles against Maryland as the defense yielded 44 of the Terps’ 51 total points. Now, look what happened against USC. Jefferson and Wheeler combined for 23 tackles as the Trojans scored 27 points, 10 below their average.

If those two, along with strong-side linebacker Naashon Hughes, don’t come ready to play Thursday against Iowa State, it’ll be another long night in Ames.

“For any defense to work, the middle linebacker and weak-side linebacker have to play well,” UT coach Tom Herman said. “I don’t think there’s any defense in the country that can mask deficiencies at those positions.”

Last season at Houston, Orlando moved Steven Taylor all over the field, much like he does with Jefferson. Taylor finished with 74 tackles, 12 tackles for loss and 8.5 sacks. If Jefferson posted those numbers this season, it’d be a career year.

Houston’s Matthew Adams had a team-high 82 tackles, 7.5 tackles for loss and two sacks. Wheeler had a career-high 65 tackles last season as a sophomore.

The USC game was proof that Orlando’s system will work if the Longhorns can control the line of scrimmage and bottle up the run game. USC’s Ronald Jones II managed only 47 yards on 18 carries. The Trojans had 71 rushing yards total. Wheeler had 3.5 tackles for loss and Jefferson added two more as Texas tallied up nine total.

Jefferson’s performance in the last two games seems indicative of a player growing more comfortable with a new system. The junior has played with more confidence, he’s evaluating things and not thinking, Herman said.

Watching Jefferson knife through the line of scrimmage and blow up plays against USC was exactly what many expected from the state’s former No. 1 recruit all along.

“It’s been fun to watch these last couple weeks, huh?,” Herman said. “He’s not doing anything other than sticking his foot in the ground and going. And when he does that, he’s really good, and he should continue to do that and even better.”

Jefferson knows he must play up to that level every week if the Longhorns are to break their losing ways, especially at Iowa State. In 2013, the game turned on a close instant replay review as UT pulled out a 31-30 victory. Two years later, the Longhorns got shut out 24-0.

“Coach Orlando and I both know that, and we talk about that,” Jefferson said. “We hold ourselves to a higher standard and that’s why coach Orlando is on us 24/7 about being the leaders, because the defense flows around what we do.”

Wheeler, the more reserved and less heralded of the two, is morphing into a grinder. The junior from Dallas doesn’t talk much. He’s simply finding more pileups. “He’s done OK,” Herman said. “I think he can continue to improve. But he’s been steady.”

Hughes is fifth on the team in tackles (13). Voted team captain for his longevity, the senior from Harker Heights has played 40 career games with 9.5 career sacks.

The Cyclones come into this matchup averaging 41.3 points per game. Running back David Montgomery is averaging 107 yards and already has four touchdowns.

At this point, there is little need for the coaching staff to harp on UT’s 1-2 record. Herman and Orlando are far more interested in watching this team improve on a weekly basis.

“I honestly don’t think about the record,” Jefferson said. “The coaches haven’t mentioned the record to us. I don’t think that it’s particularly important. Moving forward, we know we have to get better and better every week and keep that competitive focus that we had last week coming out.”

As Texas prepares for Iowa State, ‘there will be zero taking of this football team lightly’