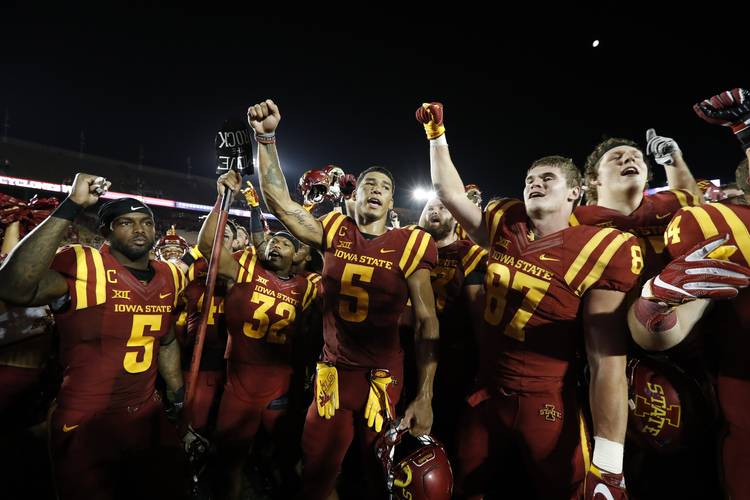 Defensive back Kamari Cotton-Moya #5, David Montgomery #32, wide receiver Allen Lazard #5 , and tight end Sam Harms #87 of the Iowa State Cyclones celebrate with teammates after winning 42-24 over the Northern Iowa Panthers in the second half of play at Jack Trice Stadium on September 2, 2017 in Ames, Iowa. The Iowa State Cyclones won 42-24 over the Northern Iowa Panthers. (Photo by David Purdy/Getty Images)

Malik Jefferson certainly remembers Texas’ last trip to Ames, Iowa. Getting shut out 24-0 by Iowa State in 2015 wasn’t even the worst of it.

“The worst memory was a little kid cussing me out as I was leaving the stadium,” the Texas linebacker said this week. “I was shocked. I’m a kid lover, and it hurt my heart, honestly, but it frustrated me as well. But I understood the environment wasn’t the same, so I didn’t take it personally.”

Jefferson was walking out of Jack Trice Stadium with guard Patrick Vahe. Both were freshmen that season when they were accosted by a Cyclones fan who “had to be 8 or 9,” Jefferson recalled.

Oh, there’s been plenty for Texas fans to cuss and discuss this decade as far as Iowa State’s concerned. The two teams meet again Thursday night in Ames in what looks like a dangerous trap game for Tom Herman’s Longhorns.

This Big 12 opener is anything but a leisurely stroll through America’s heartland. Iowa State is 21-12 all-time on Thursday nights, including a 10-4 mark in its last 14.

Texas (1-2, 0-0 Big 12) played up to the level of competition against USC. Herman said “it’s unfathomable to me” that the Longhorns would play differently against the Cyclones (2-1, 0-0).

“I would be shocked if we didn’t come out and play with the same kind of effort, energy and togetherness that we did a couple of weeks ago in Los Angeles,” Herman said.

The Cyclones have been a thorn in the Horns’ side for years now. It started in 2010 when Iowa State, with Herman as the offensive coordinator, came into Royal-Memorial Stadium and pinned a 28-21 loss on Texas coach Mack Brown.

It’s considered one of the biggest road wins in Iowa State’s recent football history. It also crushed the Longhorns. Texas would lose four of the remaining five games and finish the year 5-7. Meanwhile, approximately 1,000 fans were waiting on the team bus when the Cyclones returned to Ames.

Texas had relatively easy wins in 2011 and 2012. The following year, the game had a wild finish. Iowa State committed two pass interference penalties late and UT’s Johnathan Gray nearly gave it away with back-to-back fumbles on the goal line. Officials ruled that Gray was down on the first fumble at the Iowa State 2, and the play was upheld by review.

Texas escaped with a 31-30 win. On a last-gasp third down, Cedric Reed knocked a Cyclones pass into the air and Jackson Jeffcoat came down with the game-ending interception.

An angry Paul Rhoads yelled at reporters in his post-game news conference that for his players “to make a play … on the 1-yard line … with their backs against the wall … clear to everybody … and have it taken away from ’em … that’s hard to express.”

But Texas offensive coordinator Shawn Watson was the one yelling in 2014. Back-to-back throws by Tyrone Swoopes helped set up a game-winning field goal in a 48-45 win.

Most fans remember Longhorn Network cameras catching Watson jerking off his glasses and screaming in the press box. The coaches concocted a story that Watson was “excited” even though it was obvious he was furious about either the play call or the execution.

Then came the total disaster in Ames the following year. Jerrod Heard, then starting at quarterback, simply couldn’t get anything going. The Longhorns didn’t get past the Cyclones’ 47-yard line until the fourth quarter. The offense had only 119 yards on 38 offensive plays during the first 45 minutes.

Charlie Strong was so intent on getting points in garbage time, Swoopes threw deep balls to John Burt and Marcus Johnson to no avail. Then after the game, Strong seemed to be in another world. “You look at two losses at TCU and look at Miami, then you come here and just felt like, ‘Let’s get it together guys and play hard,’” Strong said during his post-game news conference.

Earlier that week, rumors had surfaced that Strong was considering leaving Texas for Miami. He laughed it off, but it was an ear-popping Freudian slip.

Last season Texas captured a forgettable 27-6 win at home after a relatively boring first half. The best highlight may have been Devin Duvernay’s 75-yard catch on a go route.

It was just the first time in 15 games that Texas came back to win after trailing at halftime under Strong. Otherwise, Texas moved to 12-2 in the all-time series.

Jack Trice Stadium, expanded since UT’s last trip to Iowa, now holds 61,500 fans. “They’re loud, they’re raucous,” Herman said. “I would imagine it would be much of the same Thursday night on national TV.”

To get ready, the coaching staff had loud crowd noise blaring at practice. The Horns are accustomed to using silent snap counts at this point, so it’s doubtful the noise alone could trip up the offense.

Herman said last week that if Shane Buechele continued to look good in practice and showed no ill effects from a bruised throwing shoulder, then the sophomore would start. Buechele took at least 60 percent of the practice repetitions last week, leaving the other 40 percent to freshman Sam Ehlinger.

Asked if he’s made a decision, Herman said, “We have. I’m not going to tell Iowa State or (coach) Matt Campbell who’s going to play.”

The Horns need to establish a better running game than what they showed against the Trojans. They’ll be doing it with a rebuilt offensive line after losing All-American left tackle Connor Williams to a knee injury. This will be the first game Tristan Nickelson and Denzel Okafor both get into the starting lineup.

Herman waxed nostalgic on Tuesday when asked about his three years at Iowa State. “Just really salt of the earth people who have a really passionate approach to their college football team,” he said.

Salty, too, when it comes to their Cyclones.