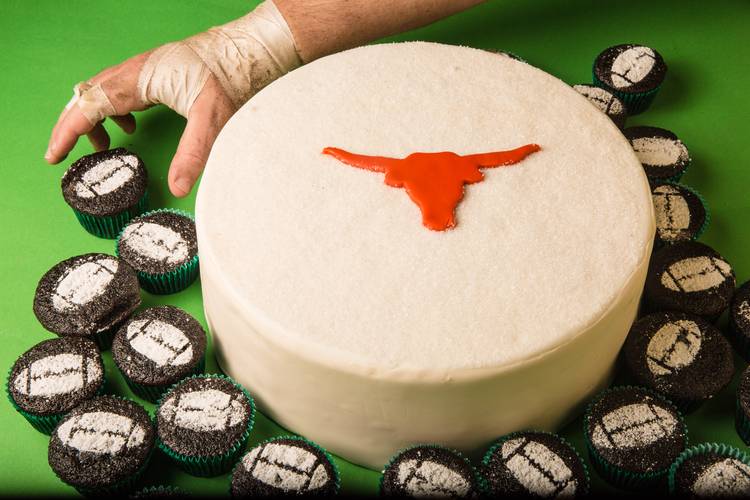 At the end of last season, former Texas coach Charlie Strong said the "cake has been baked" for the UT football program. First-year coach Tom Herman used the word "rebuild" earlier this week when asked about the big picture. (Qiling Wang/American-Statesman)

Former Texas coach Charlie Strong was so certain the Longhorns had a bright future, he proclaimed this program could compete for a national title. In 2017! His replacement, Tom Herman had it easy, so it would seem.

“The cake has been baked,” Strong said after last year’s season-ending loss to TCU, which amounted to his farewell press conference after three consecutive losing years. “The only thing you need to do now is put the icing on it and slice it.”

Either Herman’s an awful baker or this thing needs more time in the oven. Probably more ingredients, too.

Yes, the Longhorns have been playing hard this season. Texas actually led No. 4 USC and No. 12 Oklahoma in the fourth quarters of two winnable games. But Herman’s group emerged with nothing but stomach pains. With a 3-3 record midway through the year, nobody looks like a cake boss.

“We’re here for a reason, and that’s to rebuild this thing from a bunch of years of mediocrity and sub-mediocrity, and we understand that that’s going to take time,” Herman said Monday. “We also want to win right now, too.”

Many on social media interpreted that as a shot at both Mack Brown and Strong. In fairness, was he wrong? Since Texas’ last appearance in a national championship game, the Longhorns went 46-42 from 2010 to 2016, which includes the final four seasons under Brown. Strong was 16-21 in his three seasons and didn’t even reach a bowl game his last two years.

Herman spent August talking up his program. “If we can say we’re the hardest-playing, hardest-hitting, most accountable team on the football field each and every Saturday, we’ll have a chance to win,” Herman said. “That will be success.”

Then came the stunning 51-41 loss to Maryland in the season opener. “Why can’t we get out of our own way?” Herman asked reporters afterward.

“The most important game I’d probably do over is Maryland. What a bad start,” linebacker Malik Jefferson said this week. “That wasn’t our identity, and we shouldn’t start like that any kind of season. That was very critical for us.”

Think about how different the narrative would be if Texas had beaten Maryland. The Longhorns would be 4-2, and nobody would question losing to two highly-ranked teams. Instead, Texas is .500 and you can build a case that this team finishes anywhere from 5-7 to maybe 8-4. That’s a huge spread.

“I think our results are kind of misleading,” running back Chris Warren III said. The Horns haven’t gotten blown out by anybody. That alone shows how far this program has come under Herman, Warren believes. Eleven of Strong’s 21 losses were by 18 points or more.

“We’ve just got to play smarter, I think,” Warren said. “We can’t commit the same penalties. We can’t miss the same blocks. We can’t miss guys out there for tackles or deep balls. We can’t allow those things to happen.”

Texas has been searching for a program-defining quarterback ever since the fifth play of the 2009 national championship game when Colt McCoy got hurt. The Horns may have finally found one in freshman Sam Ehlinger.

Against Kansas State, Ehlinger became just the third quarterback in UT history to throw for more than 300 yards and run for 100 more. He’s now 2-2 as a starter but is four rushing yards shy of being the team leader at this point. He’s the unquestioned starter going forward.

After the disappointing start against the Terps, the run defense has found a rhythm under defensive coordinator Todd Orlando. The Horns allow just 116.7 rushing yards per game, the second-best total in the Big 12. Orlando believes that if you excel at stopping the run, everything else will fall into place.

Individually, Jefferson is having a standout season. Safety DeShon Elliott has five interceptions, which is tied for the most in the country, and defensive lineman Charles Omenihu is providing solid defensive pressure.

UT’s running game has been atrocious. Part of that is due to all the injuries suffered along the offensive line. The Horns are without starting tackles Connor Williams and Elijah Rodriguez and tight end Andrew Beck, and are starting a true freshman and a redshirt freshmen at the two tackle spots. Guard Patrick Vahe is the only lineman who has started all six games.

The Horns average 169.7 rushing yards per game. Ehlinger has a team-high 67.8 yards per game. That’s not how it’s supposed to be. Warren, Kyle Porter and Toneil Carter simply can’t create things in tight quarters, and it doesn’t help that running backs coach Stan Drayton rotates them like a top.

Without a strong running game, Texas faces immense blitz pressure. The Sooners didn’t have to bring the house, though. They were getting adequate pass rush with three or four linemen against UT’s young, inexperienced line. Ehlinger doesn’t have time to find open receivers.

Further complicating matters is that Herman has little trust in kicker Joshua Rowland, who is 5 for 10 on the season. Thus, Herman is rolling the dice more on fourth down. Texas is 5 for 14 in that department.

Texas must finish with at least a 6-6 record and reach bowl eligibility. This cannot be overstated. Anything short of a bowl game would be considered a massive disappointment for Herman, who has a five-year contract with at least $25 million in guaranteed money.

It’s possible the Horns can get hot and reach the Big 12 title game in Arlington. It will be an uphill climb, that’s for sure.

Oklahoma State has a four-game winning streak at Royal-Memorial Stadium. The Cowboys have the second-best scoring offense (48.8) in college football. Road games at Baylor and fourth-ranked TCU look tricky.

Texas cannot take Kansas lightly, not after what happened last year in Lawrence. Then comes a road trip to West Virginia; Texas is 2-4 in that all-time series. Texas Tech coach Kliff Kingsbury then brings his unpredictable Red Raiders to Austin the day after Thanksgiving.

The cake is evolving, as it were.

“This is a process. This is a journey,” Herman said. “We’re building a program, not a season, not a team, not a game. So we need to be mindful of where we’re headed and the journey that we’re on, but also be urgent with how we get there so we can win and win now.”

The post Eyes on Texas: Midway through the 2017 season, is this cake really baked? appeared first on Hook ‘Em.

Roster watch: Which Longhorns are trending up, down or sideways at the halfway point