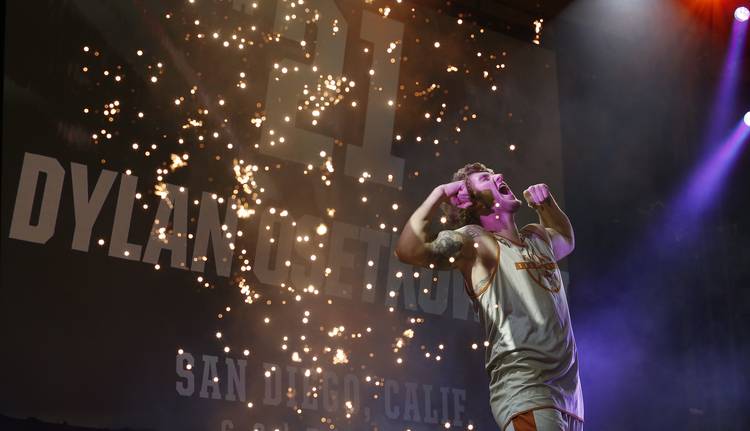 TCU’s Vladimir Brodziansky glanced over at the Longhorns and recognized guard Andrew Jones. He knew full well about the 7-foot freshman, too.

“I know Mo Bamba’s a top recruit predicted to be a first-round pick in the NBA,” Brodziansky said without hesitation.

But what about that third Longhorn that Texas brought, a shaggy-headed fellow named Dylan Osetkowski.

The Slovakian native looked again, shook his head and said, “To be honest, not too much.”

Osetkowski isn’t on anyone’s preseason All-Big 12 team. He’s not on anyone’s radar, much less their scouting report. But this 6-9 junior could be the little-known key that unlocks the Longhorns’ entire season.

“You know what’s really neat?,” Texas coach Shaka Smart told Osetkowski on Tuesday inside Sprint Center. “As we walk around here and there are all these other teams and players and coaches, a lot of them know each other. None of them know you.”

Bamba will get the lion’s share of the attention this season; he’s projected as a top-three pick in the 2018 NBA draft. Jones, Kerwin Roach Jr. and Eric Davis Jr. will share time in the spotlight as UT’s veteran core. Jericho Sims will turn heads because of his athleticism, and Matt Coleman is the tie that Smart hopes will hold it all together.

But Osetkowski, with his sharp elbows and wild-man persona, is the wildcard.

The 245-pounder from San Diego had to sit out last season after transferring from Tulane. NCAA rules allowed him to sit on the bench for home games. He he was forced to stay home whenever the Longhorns went on the road.

And man, was that tough. Osetkowski said he watched the Longhorns’ first two road games alone in his dorm room last season — losses against Northwestern and Colorado — and it was unbearable.

“Watching that in my room by myself, to not even be there for moral support, that was tough,” Osetkowski said. “That was the last time I watched the game in my room alone.”

So how does one spend a year on the bench? Osetkowski wound up developing a game-day workout routine with Smart himself. On most home game days, Osetkowski and Smart would skip the pre-game meal and go through a rigorous on-court workout along with a weight session.

Understand, this is not routine. It’s unique for any head coach to spend that much one-on-one time with any player. Not Smart, though.

“To be doing that with coach Smart and get on that level of connectivity and that level of trust we were building toward this year,” Osetkowski said, “is all I could ask for from the head coach.”

So while the Longhorns compiled an 11-22 season, Osetkowski watched from the sideline. When the season ended, practically moments after the final horn, Osetkowski got a text from Smart. “Your time has come. The waiting is over. Go make a name for yourself,” the coach wrote.

Osetkowski’s been under the radar for years, really. Tulane was the only Division I school that offered him a scholarship as a senior at JSerra Catholic High School in San Juan Capistrano, Calif. He averaged 14.8 points and 9.9 rebounds and was an all-city pick. Still, Tulane was it.

So Osetkowski grabbed it, fearing it was New Orleans or bust. Like most high school recruits, he had no idea he was signing up for a full-time job. “My freshman year, you could say things weren’t what I expected or what I wanted,” he said.

He played in 31 games as a freshman and averaged 6.3 points and 4.8 rebounds. He wanted to leave then, but coaches convinced him to stay. “Give it another year,” they told him. Osetkowski had a team-high 11 double-doubles while starting 34 games as Tulane went 12-22.

By then, he knew it was time to move on. Osetkowski announce his intention to transfer and soon got a phone call from UT assistant Mike Morrell.

“When I first got the call, I was taken aback. Wow, Texas is calling me,” Osetkowski said. “This is what I’ve been wanting since high school. After that, every school I could have wanted or imagined started calling. Picking Texas was the best opportunity, it was the best thing I could have done.”

Osetkowski worked on his body during the year off and his post moves. He’s an aggressive big man, one with an edge, too. That’s something this team desperately needs.

“Now he gets a chance to introduce himself as a basketball player to the rest of the league and everyone else we play,” Smart said.

Osetkowski and Bamba should make a formidable front-court tandem. Only Bamba will be the good-looking one. Osetkowski is purposely growing his hair and beard long. Who knows what it’ll look like before the season opener.

“He’s going to get it braided,” Jones said.

Bamba: “It is long enough! Don’t get the ponytail.”

Osetkowski takes all this ribbing from his teammates and runs his hands through that shaggy mane. Now he simply needs to help the Longhorns run through the Big 12 schedule.

“I know there are days I feel like what am I doing?,” he said. “I’m going to keep everybody on their toes about what I do.”

Like most Texas fans, Mo Bamba now a member of the Sam Ehlinger fan club

Longhorns in the NFL: Week 7 marked by defense and a big injury