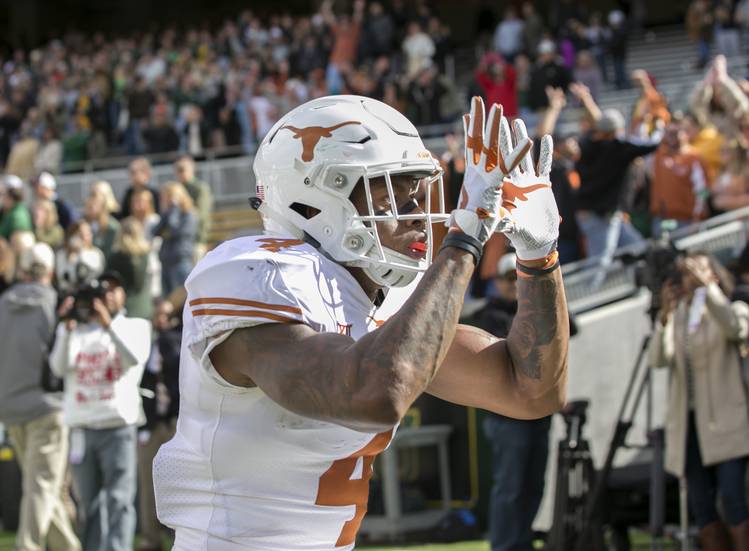 UT defensive back DeShon Elliott celebrates a touchdown after an interception off Baylor quarterback Zach Smith in the first halfat McLane Stadium in Waco on Saturday October 28, 2017. JAY JANNER / AMERICAN-STATESMAN

If DeShon Elliott went trick-or-treating on Halloween, it’s not hard to guess what he went as.

On Tuesday, Elliott’s teammates described the junior safety as an unapologetic admirer of the Joker. Elliott is such a fan of the character that his celebratory on-field move is an ode to Batman’s antagonist.

Elliott even observed Tuesday’s holiday by tweeting out a photo-shopped meme of himself as the Joker.

“Everybody loves Batman, everybody loves the Joker,” UT senior Antwuan Davis said. “Every once in a while, it’s OK to be the good bad guy, as we put it.”

Deshon Elliott’s celebration after big plays is contagious. Malcolm Roach wanted to be a part of it after Elliott’s pick 6 at Baylor. pic.twitter.com/XYan0ei7pe

Following big plays this fall, Elliott has been seen motioning his hands as if he’s just performed a magic trick. Such was the case in a 38-7 win over Baylor on Oct. 28 when Elliott returned an interception for a touchdown.

As defensive lineman Malcolm Roach said, “Anytime he’s throwing the hands up like that, it means something good is going on.”

Roach said Elliott has boasted he is the Joker’s biggest fan. The sophomore defensive end, though, doubted that claim and used Elliott’s signature move in his argument.

“I only saw (the Joker) do that in Suicide Squad only one time, I never saw him do it in any other movies,” Roach said. “I guess he’s not really a big fan. I guess he’s only watched Suicide Squad, that’s what I really think it is.”

In addition to celebrations, Elliott has found other ways to use his hands this season. Elliott’s six interceptions lead the nation and are two off of the school’s single-season record. He had also scored twice this year, forced two fumbles and tackled 40 opponents.

Last week, Elliott was named a semifinalist for the Thorpe Award.

Elliott has nabbed six of the UT’s 10 interceptions, but he said he has challenged fellow safety Brandon Jones to match his turnover totals. While he is willing to share the spotlight, however, he won’t share his celebration.

With Texas coming to town, TCU feels so comfortable at ‘The Carter’

Longhorns in the NFL: Week 8 highlighted by defensive fireworks