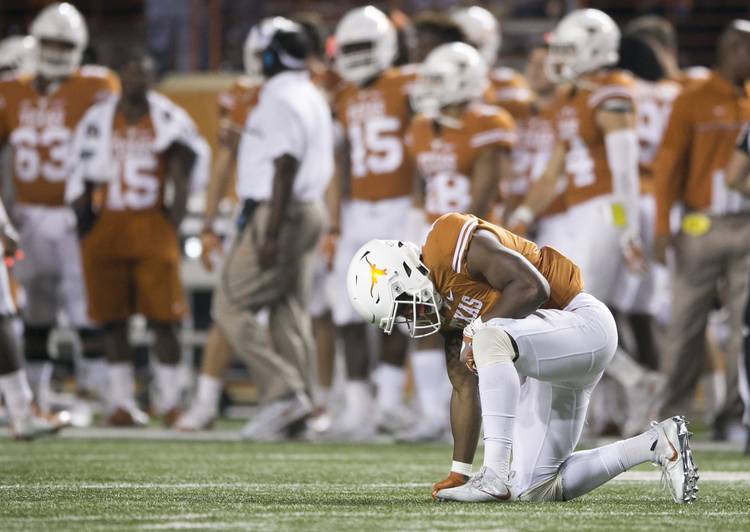 UT wide receiver Devin Duvernay is dejected after an incomplete pass on a fourth down try late in the fourth quarter against TCU at Royal-Memorial Stadium on Friday November 25, 2016. JAY JANNER / AMERICAN-STATESMAN

November should be one of the most exciting months of the athletic year. Around the Texas athletic department, it’s oddly quiet.

The UT soccer and volleyball programs are gearing up for the NCAA postseason. The women’s basketball team just debuted at No. 2 in the Associated Press Top 25 preseason poll. The men’s team has already notched a win over Texas A&M in a preseason exhibition.

Tom Herman’s Longhorns have a .500 record going into a critical month-long stretch that will shape perceptions about this program heading into 2018.

With four regular-season games left, is this a team of winners or losers? Is this a team that fights its way to a bowl game or slinks into the offseason after its fourth straight losing campaign?

So far, UT is 0-2 in these situations, having lost to No. 4 USC and No. 10 Oklahoma State. Texas also fell to No. 12 Oklahoma. Herman came to Texas with a sterling 6-0 record against ranked opponents. That’s now been cut in half.

The coach had a laser-like focus after last week’s dismissal of Baylor. “The big picture is irrelevant right now,” Herman said.

Everyone on this coaching staff and this roster should feel pressure to perform in November, though.

Herman said fans could see a “wide variety” of quarterbacks against the Frogs. Shane Buechele will likely get the starting nod, but Sam Ehlinger has been cleared from concussion protocol. Receiver Jerrod Heard also spent time working with the quarterbacks this week, too.

Buechele and Ehlinger should want to prove themselves this month. Texas has two highly-touted quarterback recruits ready to sign letters of intent in December — pro-style quarterback Cameron Rising and dual-threat athlete Casey Thompson.

Freshman running back Daniel Young could get more carries this week with Toniel Carter out with a concussion. If Kyle Porter or Chris Warren III have any chits left, November’s the month to cash in.

Herman indicated that Lil’Jordan Humphrey may get more chances in the passing game. Reggie Hemphill-Mapps is supposedly feeling better after a knee injury. A slew of other receivers still have plenty of time to make a serious mark. But will they?

And if this offense gets remotely within scoring range, kicker Josh Rowland better be ready. Herman may now be gun-shy about going for it on fourth down, considering Texas is 6 for 17 in that department these days. If Rowland can’t get it done, maybe prospect Cameron Dicker from Lake Travis can next season.

Defensive coordinator Todd Orlando simply wants to keep his foot on the gas at this point. He’s overseen a dramatic turnaround.

“It’s awesome,” Jefferson said this week. “It’s one of my secret goals that I’m working on.”

Asked about leading the Horns with 76 tackles, Jefferson said, “That’s where it should have been. That’s my fault and I take responsibility of that not being there in the past.”

Multiple defensive players have proven themselves in the first eight games. Holton Hill has enjoyed a tremendous resurgence at corner. Charles Omenihu is blossoming into a solid threat. Once he was finally turned loose, Breckyn Hager got back to his wild-man ways.

Still, this is a defense with a tendency to start slow and get stronger as the game progresses. TCU’s biggest tail-kicking in this series two years ago was the result of a terrific start. The Frogs had a 30-0 lead with 26 seconds left in the first quarter.

TCU’s 48-10 win on Thanksgiving in 2014 and 31-9 win in 2016 weren’t as bad but just as thorough. UT coaches had small posters made up this week with the previous TCU scores printed in big, bold letters, for all the Horns to see.

Herman said he started that at Houston, “just for a little added motivation, a bit of anger, maybe even embarrassment,” he said.

“A lot of our job is to be a part-time psychologist,” Herman said, “so any added benefit we can get to try to poke the tiger and get a little more out of kids, we’ll take.”

The Longhorns have spent plenty of time on the couch the last three years talking about what’s gone wrong. Fans have to be wondering when it’ll start going right.

A monumental road win in Los Angeles was coughed up on the goal line in double-overtime. A Big 12-defining win over the Red River rival was lost on a defensive breakdown exploited by a tight end. Another game-changing win was lost on a botched pick play that led to an interception in the end zone.

Is there more heartbreak ahead in November or more excitement?

“I feel pretty good right now,” Roach said. “Just continue to play hard and play within the system, and I think we will be pretty good.”