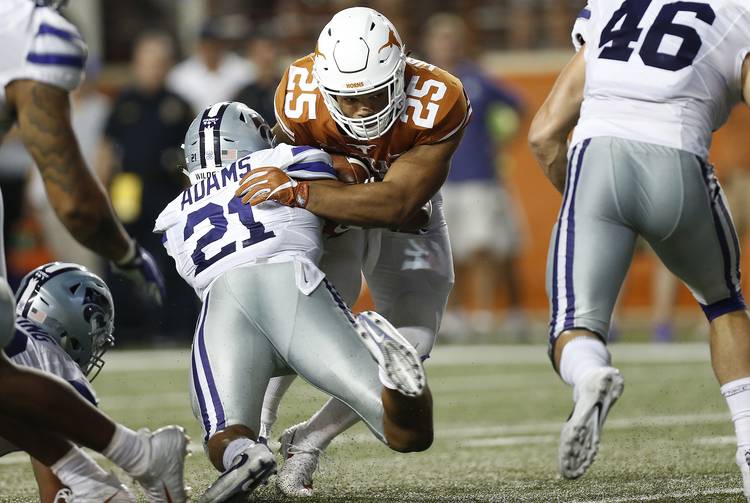 Texas running back Chris Warren III (25) works between Kansas State defenders Kendall Adams (21) and Jayd Kirby (46) for a first down in double overtime at Royal-Memorial Stadium on Oct. 7, 2017. (Stephen Spillman / for American-Statesman)

If Chris Warren III plays football this fall, it will be on the professional level.

On Friday, the NFL released a list of players who had been granted special eligibility for the NFL Draft. Texas fans should have expected to see offensive lineman Connor Williams, linebacker Malik Jefferson, punter Michael Dickson and defensive backs DeShon Elliott and Holton Hill listed among the juniors who had met the league’s three-year eligibility rule. The addition of Warren’s name, though, was a surprise.

In November, Warren announced his decision to transfer from Texas. He did not play in UT’s bowl game.

Warren, though, never announced which school he would resume his collegiate career at. It appears the 6-4, 250-pound Warren will instead try to catch the attention of NFL scouts.

Warren ran for 1,150 yards on 204 carries during a roller-coaster career at Texas that featured a 276-yard game against Texas Tech in 2015, a myriad of injuries and a position change. Warren ran for 166 yards and two touchdowns during the second week of the 2017 season, but he was unable to replicate that performance. He was eventually moved to tight end.

Warren’s father, Chris, played 11 years in the NFL for Seattle, Dallas and Philadelphia.

This week in NFL mock drafts: Another orange-wearing team is a fit for Connor Williams