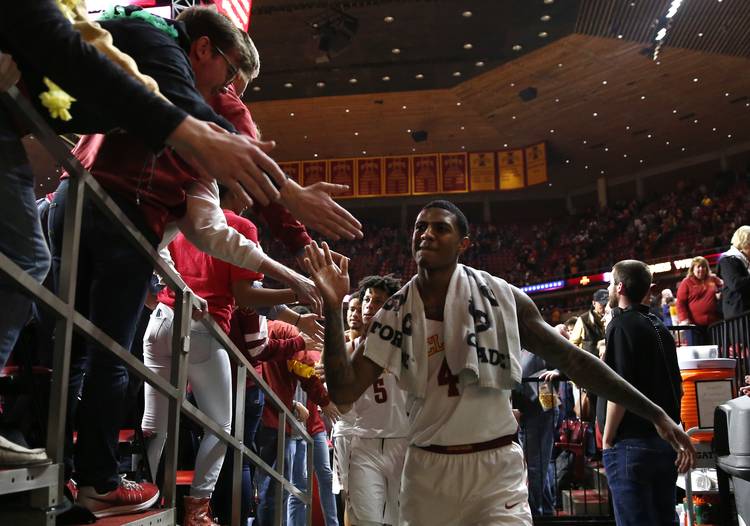 About the series: Texas leads the all-time series 20-16, which includes a 74-70 overtime win in the previous matchup on Jan. 1. Matt Coleman sparked a 13-9 run in the extra period with multiple drives to the basket as UT captured its first win in Ames since 2010.

About the Longhorns: Everyone in burnt orange was stunned at how the West Virginia game got away from them. Asked about scoring only 51 points, coach Shaka Smart said, “Disappointed in that, and disappointed in how many points we gave up. But it all goes back to mentality and mindset and approach. The guys had at the beginning of the game, but we didn’t stand up to them throughout.” The 35-point margin of defeat was the biggest in Smart’s three seasons in Austin. … Eric Davis Jr. and Jase Febres gave the Horns just five points combined off the bench and were 2 of 6 combined. … UT had been shooting well on the road. But the Horns were 3 of 15 from 3-point range against WVU and shot just 34 percent overall.

About the Cyclones: Coach Steve Prohm’s club is coming off an action-packed 70-52 rout of No. 8 Texas Tech, the same team Texas beat last Wednesday. The 18-point win was the largest margin of victory over a top-10 ranked team in Cyclones history. Cameron Lard was 9 for 11 shooting and had three blocks. He now ranks third on the school’s freshman block list with 35. “I was ready to play hard,” Lard told reporters afterward. … In addition to getting solid contributions from the starters, Iowa State’s Zoran Talley Jr. had a career-high 11 points and six rebounds coming off the bench. … Iowa State’s victory came after getting blown out by TCU in Fort Worth. The Horned Frogs shot 60 percent in a 96-73 win.