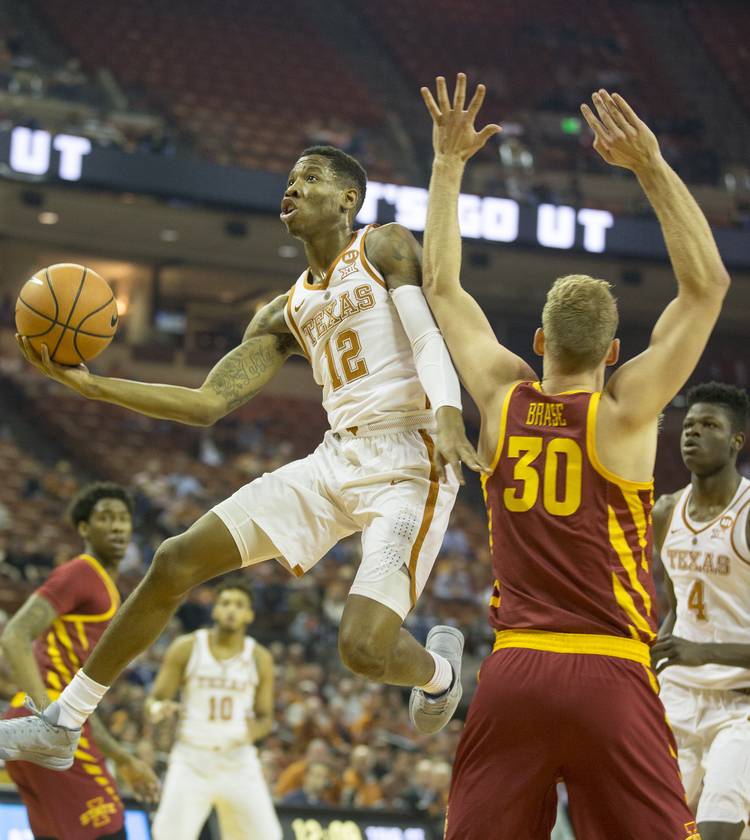 Texas players knew they needed short-term memory after the worst loss of the season. Saturday’s loss to West Virginia was a distant memory by Monday’s tipoff against Iowa State.

The Longhorns responded by controlling the pace and cruising to a 73-57 victory over the Cyclones.

The Horns ran up a 16-point lead with 6:25 remaining but the Cyclones (11-8, 2-6) simply wouldn’t go away. It didn’t help that Texas went 5:22 without scoring down the stretch. In fact, UT closed the game with only eight points — six of those were free throws and one bucket was a near-gimme before the horn — in the final 6:25 and still won.

After the West Virginia game, Bamba said he’ll get more shot opportunities down low. “Touches down there, they’ll get there,” he said. The 6-foot-11 freshmen got lots of work against the Cyclones. He finished 9 for 11 shooting overall and was 2 for 2 from 3-point range.

It helped that Iowa State’s Cameron Lard made him mad. Lard blocked Bamba’s dunk attempt in the second half. The big man responded with a thunderous two-handed flush and then a 3-pointer from the top of the key.

Give Texas credit for bouncing back from Saturday’s 35-point loss to West Virginia. The Horns came out fully loaded and jumped out to a 20-9 lead early. Roach hit back-to-back 3-pointers, and even Bamba drilled one from the top of the key. Iowa State couldn’t get in gear offensively through the first 10 minutes. Texas finished the half with a 10-point lead and shot 43.8 percent.

It wouldn’t be a Texas basketball game without a five-minute scoring drought. The Horns went the last 3:09 of the first half without a field goal. Dylan Osetkowski’s 3-pointer with 17:49 left in the second half was UT’s only field goal in the first 4:50 after the break. The Cyclones were able to chip away at a 15-point deficit and get back within seven.

Hamm somehow committed two fouls and hit two free throws literally within five seconds. On some level, that’s impressive. Hamm isn’t in Smart’s regular rotation, but the coaching staff has high hopes for the 6-foot-8 freshman. They believe he could be a rock-solid college basketball player eventually.

Texas will take a weekend break from Big 12 play and host Mississippi in the annual Big 12/SEC Challenge. Every year, teams from both leagues play in this made-for-TV event meant to spice things up in late January. Ole Miss is struggling this season, having posted a 10-9 record heading into Tuesday’s game against Alabama. The Rebels have four players averaging in double figures, including team leader Deandre Burnett (14.3).