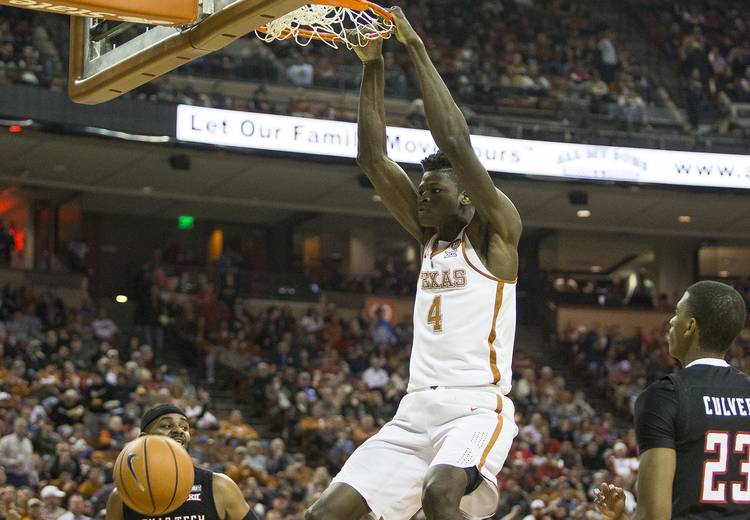 And he just may – just may- – be drafted higher than all of him. Or he he could find himself outside the top five, according to The Ringer’s NBA draft writer Kevin O’Connor,  who recently wrote that Bamba is this year’s “biggest boom or bust prospect.”

O’Connor’s is clearly impressed with Bamba’s defensive ability. With his 7-foot-9-inch wing span is averaging 4.4 blocks per game, there’s lots to like. O’Connor writes:

Bamba’s defense is the foundation for the rest of his career. His endless arms allow him to rack up deflections, steals, blocks, shot alterations, and maybe even the ability to tie his shoes without leaning over. He’s equally stellar at blocking shots with either of his hands, and does a good job of staying vertical and not fouling.”

However, he isn’t sold on Bamba’s offensive game, where the big man from New York has been up and down all season. Recently Texas men’s basketball beat writer Brian Davis asked Bamba if should take more shots, to which Bamba said:

“Strategically it kind of works out. You set a ball-screen, and instead of rolling (down) and bringing a shot blocker back into the play, you kind of pop out and get him out of the play. You kick back to me and get it in rhythm and just shoot it up.”

The answer speaks volumes because O’Connor writes “Bamba can shoot, but there’s not a lot of evidence he can shoot well.” Bamba is shooting just 22 percent on those pick-and-pop plays that he mentioned.

O’Connor also explains why Bamba doesn’t do what a lot of Texas fans think he should do, and that’s call for the ball on the low block. As O’Connor writes that the 19-year-old just isn’t ready for that type of game, physically.

Bamba’s lack of strength severely limits him on the blocks. He struggles to wall off defenders, so he gets pushed far from the rim, and he lacks advanced post moves.”

The best example of his lack of strength may have come in one of his best games. Kansas center Udoka Azubuike, a 7-foot, 280-pound sophomore center got blocked several times by Bamba but he also wore him down as the game progressed with his physical play on the low block on both sides of the court.

It’s clear Bamba is going to be drafted in the top 10. He won’t slide like Turner and Allen did. In fact, what this article might say even more is that Bamba is still very much in the conversation for the No. 1 pick, especially since the overwhelming player comparison is NBA All-Star Rudy Gobert.

Need a look? Here are some Gobert highlights: