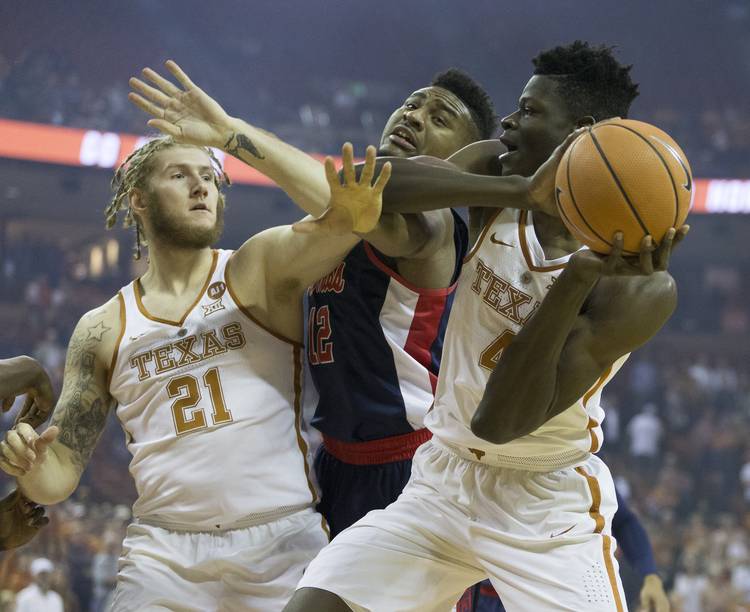 The Longhorns spent all week in the “lab,” as they call it. The team that emerged on Saturday against Ole Miss looked like one that had been totally reset under coach Shaka Smart.

Playing full-court pressure and going full-throttle from the start, Texas stormed to a 85-72 victory at the Erwin Center. It was a clear break from some of UT’s recent games, and if the Horns (14-7, 4-4 Big 12) can keep it up, February will have a totally different feel.

It was the most points Texas has scored in regulation since racking up 82 in a win over Florida A&M on Nov. 29.

There’s a marketing campaign to be seized upon, thanks to UT band member Josh Martella. Fans noticed when he held up a sign that read “Dylly, Dylly,” a funny take on Dylan Osetkowski’s name and a play on a current popular marketing campaign. Maybe UT fans can shout that every time Osetkowski does something big. They had plenty of chances against the Rebels. Osetkowski had 17 points on 6 of 11 shooting and scored on several hustling put-backs.

A team desperate for some easy points finally got it rolling midway through the first half. Bamba picked up a flagrant-1 foul for pushing Marcanvis Hymon. That appeared to flip the switch in a tie game, 25-25. Osetkowski scored twice, Roach scored on a driving layup, Osetkowski got a put-back and Febres swished a 3-pointer. Osetkowski’s dunk gave Texas a 38-28 lead with 5:15 left before halftime.

There was a collective hold-your-breath moment in the first half when Bamba headed for the locker room. It appeared he took a hard shot trying to stop Justas Furmanavicius going to the basket. A team spokesman said Bamba was being evaluated for a left thigh injury. But Bamba jogged back onto the floor minutes later and checked back into the game with 9:55 left before halftime. Suffice to say, Texas fans were relieved.

The last six games without Andrew Jones, Texas’ opponents have enjoyed a surge in scoring. But Ole Miss struggled against Bamba’s length and the Horns’ defensive tenacity. Dominik Olejniczak was content to try hook shots all game long. The Rebels came into the game shooting 44.3 percent this season. They were down by 15 points with 12:05 left in the game after hitting only 36.2 percent.

Prior to Saturday’s game, it was announced that ESPN’s “College GameDay” will be in Austin next week before the Texas-Oklahoma game.

Texas gets back to Big 12 action on Wednesday with a road trip to Lubbock. Texas Tech captured a 70-63 win over South Carolina on Saturday as part of the Big 12/SEC Challenge. The Red Raiders finished the game on a 13-2 run. Texas stunned Tech with a 67-59 win at the Erwin Center on Jan. 17.